Skip to content
Hi, everyone.  My name is Jon, and I suffer from Gamer ADD. 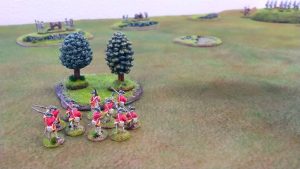 How can you not, when we have the pleasure of being born in the right time and at the right place to enjoy this late-stage golden-age of the hobby?  And yet I find myself looking back to Tradition, and taking up the challenge of Napoleonics.  These French light infantry need some grass on the field and maybe a flag but are otherwise ready to play ball.  A small unit of seven gives them a lot of flexibility and just enough punch to keep the Redcoats hopping. 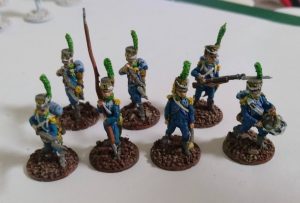 As reported before, I’m getting deep into Osprey’s “Chosen Men” and finding it a fun little throwback. It’s been called a Warhammer knock-off, and I can’t speak to that except to say that the game is just a lot of fun.  It allows for a lot of customization for that sweet off-table fun of army building, uses a tidy alternating activation system, and doesn’t suffer when you ignore fairly sizable chunks of the command rules.  Seriously, some of the order stuff takes a long time to wrap your head around, and the game remains just as fun even without those rules.

One minor nit-pick – the lists assume you’re building troops in increments of either five or ten, and swapping out fighters for standard bearers, buglers, and trumpeteers.  Eh.  I pro-rate the costs and use units of whatever size I have on hand.  If that means a unit of seven figures on one side and nine on the other, so be it.  As long as the points generally work out, it’s all good.
Let’s close with a bit more art.  These foot dragoons will never see the back of a horse – Chosen Men operates at too small and furious a scale to allow for the business of dismounting, horse wrangling, and whatnot.  But they will show up as hardy skirmish types ready to seize ground and hold until relieved.  Like the paratroopers of the day, they dive deep into the enemy territory and embed themselves like an Alabama tick, and the look so much better while doing so.  Normally fielded in units of five, as with the rest of the units in this game, I allow for larger troops to get the most out of my collection.