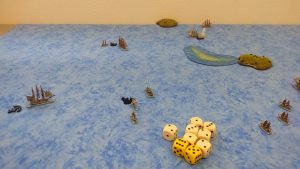 One of the hazards of video content creation, particularly when you’re doing the job of three me – videographer, host, and referee – is that often when settling down to edit the video you catch little errors on one of those jobs that you didn’t notice while filming.  Most of these little mistakes mean little.  A figure moves out of frame for a few minutes, or you forget a modifier that would have turned a hit into a miss.  The viewers understand the complexity and have been very forgiving of my stumbles to date.

However, sometimes you get to the end of a video and just can’t in good conscience hit the ‘publish’ button.  It can be frustrating to lose a whole video worth of effort, but this one just had too many oopsie-doopsies in it. 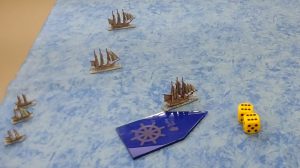 We’re talking about adventure on the high seas today, with a battle fought using Ospre’s wonderful ruleset “Fighting Sail”. In this one three ponderous ships of the line have been tasked with shepherding three smaller and more agile cargo ships through a gauntlet of pirates, privateers, and general ne’er do wells.

The game was a lot of fun but bogged down due to an error in scenario design. In an effort to make the game “more interesting”, I added a bit of terrain in the form of islands and shallows.  Instead of adding more fun to the game, they became a bridge too far, for reasons that I had to experience to understand.  Turns out, the extra bits added un-necessary complexity that bogged the game down rather than spice it up.

Not sure who explained it to me on the twitbox – maybe @bob_lollard  or @Hethwill_Khan – that the beauty of age of sail is the wide open spaces, that ships meet on a level field, with the uncaring wind the only resource to manage. There is a purity there, one I need to embrace more. 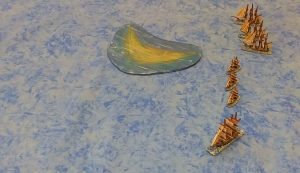 There’s probably a life lesson in there. Something about bells and whistles being mere distractions, and to focus more on the guts of life’s engine and less on the chrome.

Such a great hobby.

Getting better at it all the time.