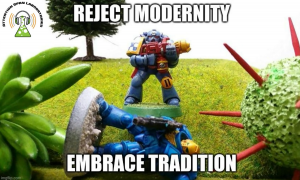 “Oldhammer is best hammer, and it’s more than just nostalgia. At a small scale, too much and over-fine detail is bewildering to the eye. Just like the Heroquest video says, you can tell what the old models are from a distance; many newer ones are so ornate you can squint at them up close and still not be quite sure what they are supposed to represent. The old models are packed with detail as well, but it is bigger, bolder, more exaggerated, the same way poses are exaggerated in comic books — because the exaggeration is necessary to convey movement, weight, and power in a small, static image. I suspect that hand-sculpted models also appeal to the imagination more than computer-sculpted models for the same reason that hand painted paintings win out over digital art. There’s something more inherently real in their rawness, the bulk shapes and colors that give a solid impression that may not actually be there in fine detail. Meanwhile, the ultra-sharp detail on computer-rendered sculpts are only pseudo-realistic and have visual giveaways, likely related to angle, depth, and scale that may be hard to verbally articulate, yet combine to give the impression of a lifeless simulacrum of a real thing rather than the thing itself.”

So it’s not just me.  I touch on this in my videos often, but not quite as succinctly. Painting miniatures is an impressionistic exercise, and over-“pixelation” of the figures actually distracts from the overall spectacle.

We humans have evolved to extrapolate from imperfect data, to find correlations, and to “fill in the gaps”. Our brains are simply hard-wired that way for optimum performance. It’s a lot more efficient to take in generalities and then allow our brains to add in detail where necessary.

You have to work with that when painting 2mm figures, but the principle applies at all scales.

One theory that I’ve been playing with: Modern figures aren’t designed for the tabletop. They are designed to be marketed on-line. That means looking good in a close-up on your monitor is Job One. Looking good on the table takes a back seat to that. Which makes sense from a business perspective. Think of how many more figures are sold than painted, and then of all the painted figures an even smaller subset will see the table. Hence, they are no longer designed to be used on the table – they can be designed that way, but it isn’t the primary focus of Corporate Wargame Inc.

Mike is smart, and his comment helped me put this together in my head.  I really hope he does a video about it.  If and when he does, you’ll probably want to be subscribed to his channel.  Go do it right now.