My efforts to branch out from skirmish wargaming into larger scale battles has borne some pretty tasty fruit.  Osprey’s “Absolute Emperor” has proven to be as easy to play as it is easy to handle.  Large divisions sweep across the field, unwieldy but powerful, and with a minimum of ‘fussiness’ you can get through a pretty sizable engagement in an hour.

Once you power through the introductory scenarios, however, the wargamer hits a pretty substantial wall.  The game is entirely predicated on fighting over individual geographic points.  Army corps are either attacking, defending, or waiting to do one of those two things.  Which means that your standard “line ’em up, call hike, and send the lines crashing into each other” just won’t cut the mustard.  You can build 100 point corps for balance, but you still need to have something to fight over.  And if one player starts on defense, he’s at a distinct advantage.

Which means that you’re going to need to draw up some better scenarios than deadly games of Red Rover.  And that means doing a lot of reading and research.  I highly recommend David Chandler’s Dictionary of the Napoleonic Wars, for solid treatments of a host of engagements fought from the late 1700s all the way up through the end of the Corsican Ogre’s reign.  It’s often a bit light on actual orders of battle, giving total numbers of men, with only the rare breakdown by troop quality and infantry versus cavalry numbers. 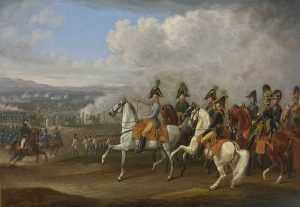 Not to worry! These guys, have got the back of time-pressed tabletop generals everywhere.  With more than twenty scenarios all kitted out for the stolid Horse, Foot, and Guns, they’ve got just enough information to make you dangerous.

Which brings us to the Battle of Mincio River, and my adaptation for Absolute Emperor.  Following Napoleon’s defeat at Leipzig, a veteran Austrian army led by Field Marshall von Bellegarde finds itself with an opportunity to cut the Italian peninsula loose from Napoleon’s grasp.  Opposed by an equivalent sized force of conscripts led by Napoleon’s step-son, Eugene de Beauharnais, if Bellegarde can crush the French, he can link-up with and join forces with the French defector and now King of Naples, Joachim Murat.  After a string of failures on the scouting and intelligence fronts, both armies blunder into each other, both with their forces straddling the river and unable to concentrate their firepower.

The French, led by Beauharnais, have the following two divisions at their disposal:

The Austrians, led by Bellegarde, have the following: 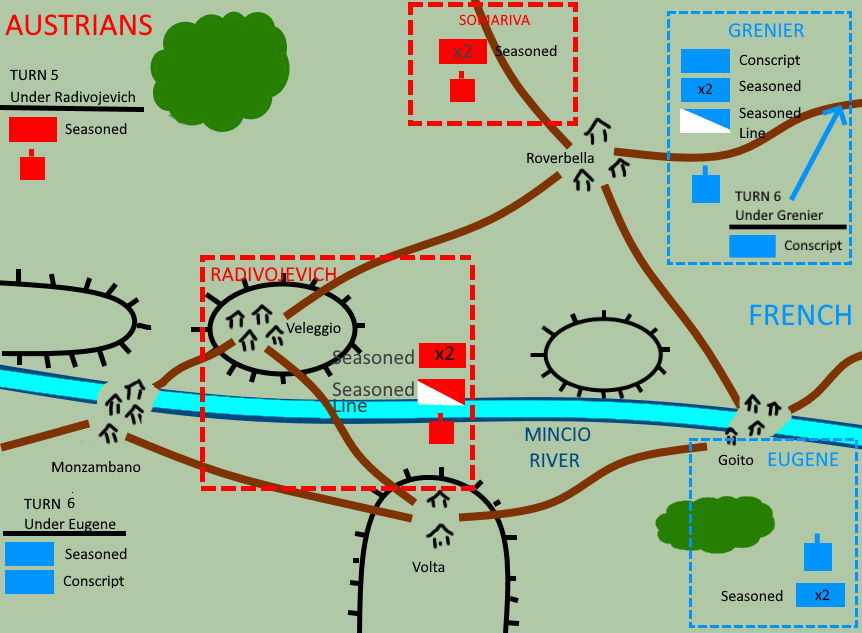 The force-specific rules are also in effect as listed on Page 38 of the rulebook.

While the French have a slight advantage in numbers, the three extra units on their roster are all Conscripts.  This is balanced by the slow feed of extra troops, and the difficulties of co-ordinating across the board.  The reinforcements in the south are required to move into command radius of .  In addition to that, the Austrians have the advantage in Elan to start the festivities.  So it should prove a balanced encounter.

Sharp eyed readers will have observed that Bellegarde is listed as a 3 Elan kind of guy in the rulebook.  I’ve given every commander here a +1 bump to Elan in order to keep things balanced, while still allowing for a decent game.  Those 2 Elan commanders tend to wilt a little too early to make for an interesting game.

And again, let me offer thanks to the guys over at Napoleonic Scenarios.  Anything you see that’s accurate here, give credit to them.  Anything that’s wrong is not worth stressing out about.  If this battle works well, I’ll be stealing more ideas taking more inspiration from them in the future.