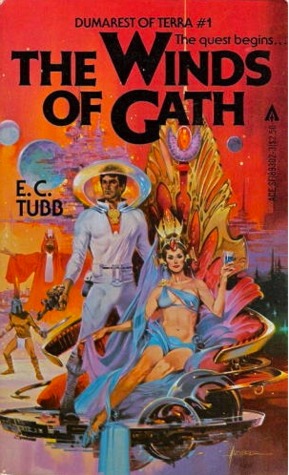 Way back in 1968 E. C. Tubb published a fun little stand-alone adventure, The Winds of Gath, featuring a laconic space traveler named Earl Dumarest.  Terse, punchy, and full of tension, it read like a Dashiell Hammett novel, complete with political intrigue, wealthy dames in trouble, and the kind of protagonist with just enough character to feel real, but just enough left unsaid to let the reader feel like, “Hey, that could be me.”

Before we get to the analysis, let’s talk logistics.  You can pick up each title on Amazon for about anywhere from one to three bucks each, and at roughly 180 pages per novel, they make for quick reads that pack a lot more entertainment between the covers than most 600 page bloated works offered by NYC publishing houses today.  And Amazon very helpfully provides an easy path to following the saga in order – the saga runs and was published chronologically – which makes it easy to follow the adventure in both the publishing order and the order in which Dumarest makes his way through the Milky Way.

Enough of that, let’s talk about the important stuff.

Earl Dumarest started his thirty-three volume epic as a guy down on his luck.  Broken, stranded on a hostile planet, and forced to fight for every scrap of hope he could find, it was a situation ripe for adventure and action, and one he would find himself in repeatedly over the course of his saga.  Fortunately for him, and the reader, there’s good money to be made in risking life and limb, and usually a sexy gal ready to goad him into taking that risk.  The entire run of the series is marked by Earl’s desire to find his home planet, Terra, a place he left when too young to realize the importance of watching your back trail.  Stuck a million light years from a home it turns out is only a legend in the minds of men, he follows a string of clues that bring him ever closer to his life’s goal, sprinkled with enough red herrings and dead ends to keep the story flowing. 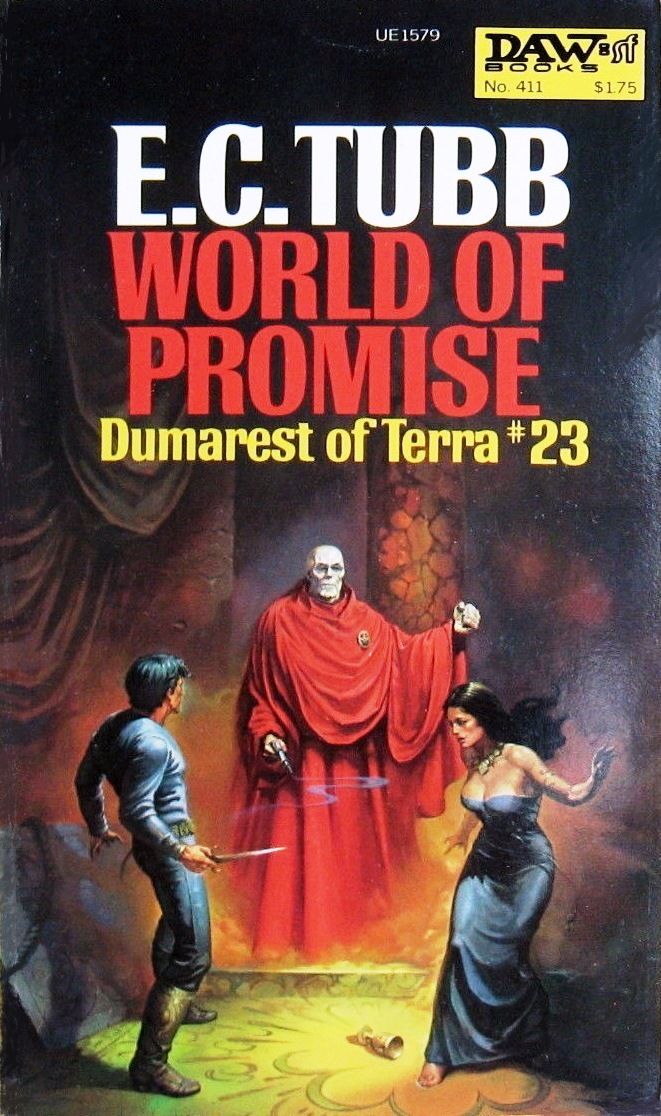 Clearly started as a one-off, Tubb must have recognized how ripe Dumarest was for a series.  With each successive title, he adds a little more nuance and depth to the galaxy and to his hero.  The narrative grows as it trundled along, adding in a menacing galactic organization in the form of the Cybers – men turned machine-like who seek to dominate the galaxy and strive for the right to join an ersatz hive-mind upon the completion of their task.  Tubb adds a friendly organization in the form of a Universal Brotherhood of holy men present on every settled planet, and a neutral faction of traders who serve as go-betweens as well.  Within a few books Tubb gives Earl the key to the Cybers plans of galactic domination, and what started as a simple game of hide-and-go-seek for Earth becomes a cat and mouse game with Earl always in the role of mouse.  It’s a great way to add stakes to the hunt, and with each successive book and each successive escape by Dumarest to another planet, it gives Tubb the freedom to play with the episodic structure of the series. 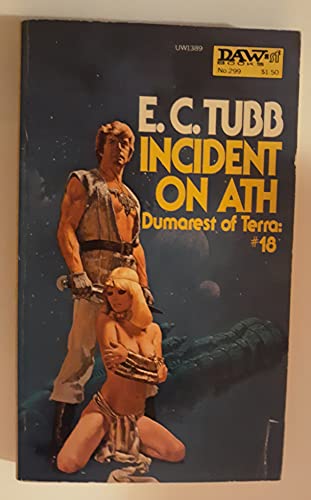 Which is one of its strong points.  Each novel serves as a stand-alone adventure loosely tied to the overall structure of the saga.  The feeling is very reminiscent of the 1980s adventure TV shows such as the A-Team, Quantum Leap, or Highway to Heaven.  Our hero drops into a complicated situation, rights some wrongs, fights his way free, and moves on to a new adventure next week.  With just enough connective tissue to keep things headed in one direction, it makes for a steady and progressive journey without all of the tedious book-keeping and memorization and note-checking that more dedicated sagas such as Game of Thrones require from the reader.  It demands just as much from the reader, but Dumarest places its demands on the reader in very different places, which we will get to in a moment.

A lot has been said about the Dumarest of Terra saga already – a surprising amount given how far Earl slipped under my own literary radar. Here, Jeffro Johnson talks poignantly about the romance that infuses the series. Here, Freelance Traveller discusses how much the tabletop RPG Traveller owes to Tubb and Dumarest.  Some have argued that you could build a full Traveller campaign by reading five random titles in the series and mashing the settings from each into one glorious campaign – and they are right.

But that’s not what we’re here to talk about today. 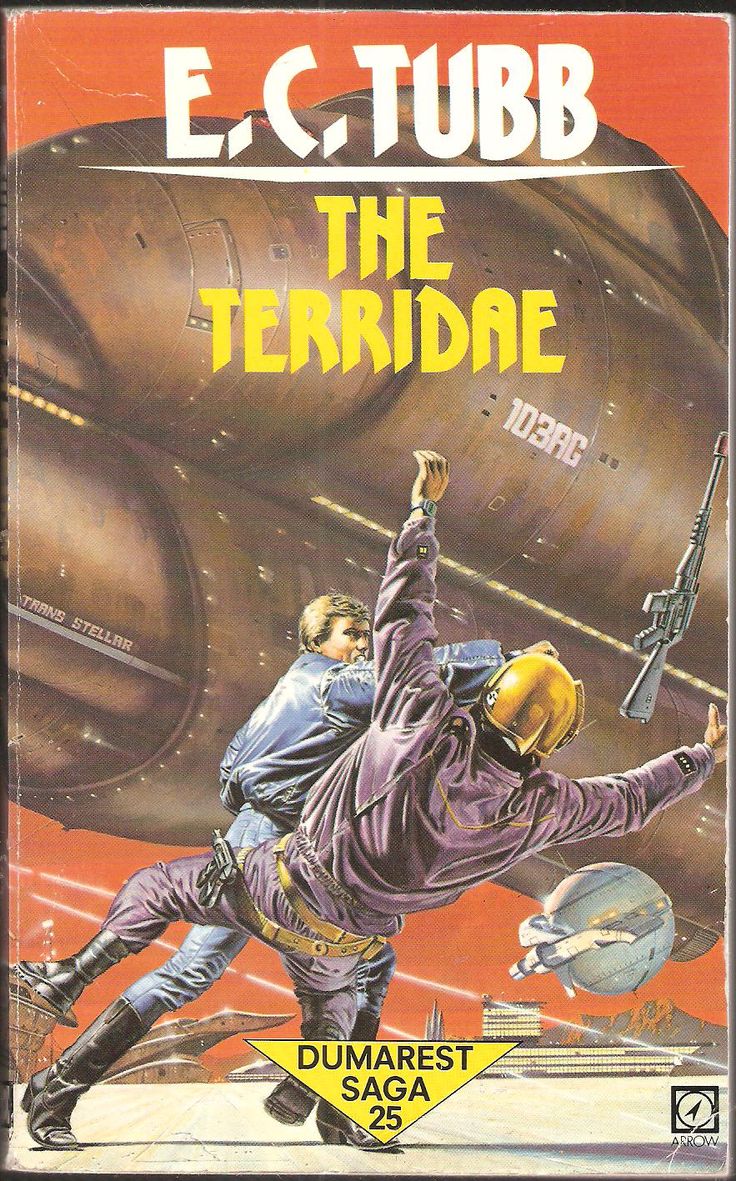 What we’re here to talk about today, and something very few have discussed is, how frequently the series slips free of its trashy, dime-store leash to run wild among the flowering fields of masculine philosophy.  Tubb frequently challenges Dumarest with situations where he is forced between doing what he thinks is the right thing to do and doing what is the smart thing to do.  Often, this takes the form of a stark choice between helping others and his own survival.  Dumarest often faces the hard choice of chasing his dream – home – and settling down to an easy life among a small community.  He is forced to weigh the pros and cons of a hard life of adventure and travel against the pros and cons of the hard life of settling down, building a community, and raising a family.  Sometimes his life’s worth is judged by others, sometimes he is forced to judge the worth of the life of others, and always Tubb takes the time to weigh things carefully and consider man’s role in the universe, or his role in a society, or his role as protector and provider.  It’s a surprisingly deep series at times, and pleasantly so.  While Tubb’s gift for spectacle and blood and thunder shines, it is in these quieter moments that the thoughtful reader can really appreciate his skills as a writer and story-teller.

And it’s these moments that lead me to recommend the series whole-heartedly to anyone looking for a lost classic.  This classic may just have been lost on purpose as it reminds us of all the best quality of a man on a mission, a strong man following his own heart, and a tough man following his own thoughts.  Sadly, there’s little place in our soy-based world for a red-meat adventurer like Earl Dumarest.  Which makes remembering this treasure all the more important for those of us who look at him and dream, “That could be me.”