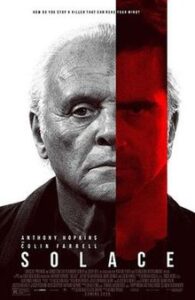 In the last two minutes of this film we learn that Anthony Hopkins’ character, ostensibly the good guy, murdered his young daughter.

Now you don’t have to watch it.

The plot of this film revolves around a cat-and-mouse game between a psychic FBI investigator and an even more psychic serial killer who mercy kills people before they even know they have a fatal medical condition.

The first couple of hours of the film are an interesting slow burn that might have led to a great film.  The central question of whether or not mercy killings are acts of love or hate are punctuated with enough Christian iconography to give the viewer hope that the film-makers snuck a fast one past the usual Hollywood censors.  What could have been a daring and unusual film surrenders in the last scene to the obligations of Moloch in the City of Angels by finally coming down firmly on the side of the death cultists.  They toy with the idea that mercy killing amounts to playing God, and that God will not be mocked, and despite themselves that idea still makes it through to the final product – as the serial killer contracts a deadly disease of his own and winds up put down like the dog that he is.

Instead, we get the same old, tired sewage as usual.  A film-maker with a functioning set of balls would have done something different and interesting.  Solace just can’t bring itself to do either.  It is a total snooze-fest that I’ve already spent too much time talking about.

Give it a solid pass.