For your own sake.

Conan the Librarian, one of the deepest thinkers and smoothest writers around, has a new project over on the KickStarter.

Here is how I described this collection back in 2016:

The stories in this [book] are an eclectic bunch, written by a man who seems to be experimenting.  That’s an awfully dry and clinical word that doesn’t do the results justice.  This body of work consists of a series of homages to different styles of sci-fi and fantasy.  In one he’s playing with the classic white hat versus black hat.  In another, he’s trying his hand at alien worlds written from the alien perspective.  In another, he takes a whimsical fairy tale approach to the anti-hero getting his just deserts.

Each story takes a different tone, and each has a very different feel.  In the hands of a lesser writer, it might feel random or like an inexperienced author trying to find his voice.  Thune’s Vision didn’t strike this reader that way.  Rather, that the author is adept at writing from different perspectives – that he seamlessly dons new personas like a stage actor.

That gift of Hernstrom’s is a powerful one, and one that the big publishing houses seem hell bent on running away from.  They place a strong emphasis on the identity of the writer, and insist that the writer bring his or her own voice to each work.  This book cuts across that grain by featuring a writer who doesn’t have A voice.  He’s got a lot of voices.  And they are all a lot of fun to hear.

And that, dear reader, is the true measure of literature. 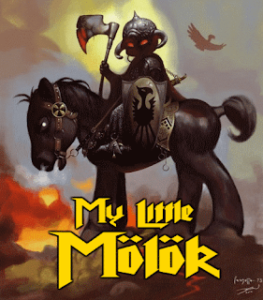 That was written before I’d ever spoken a word to Schuyler.  In the years since – consider this your conflict of interest warning – our relationship has shifted from fawning fan to fast friendship.  He has proven to be more than just a phenomenal talent, he has proven to be a deep thinker and even better – a good man.  And in the world of fantasy literature those can be hard to find.  You certainly won’t find very many on the shelves of the big retailers, but you can find them in small corners of the internet.  In this case you can find him on Kickstarter, but only if you know where to look.

Let me show you.

If you haven’t read this yet, you can get your hands on a Check it out: