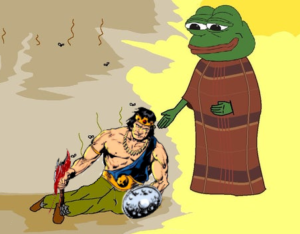 The #Trollopulous MegaVerse is the most interesting thing to happen to D&D in decades.

Those glorious edgelording bastards in the #BROSR found a way to reinvigorate a hobby that had plateaued and they did it by taking a game everyone owns but doesn’t play and, for the first time in 40 years, played it.

But don’t take my word for it.  Take the word of the people who make a living sniffing out parades and then leaping out in front with a baton.  Jeffro has the full skinny here:

Today? Every gross nerd on the planet claims to be an expert on this type of play– to have tried it decades ago, only to throw it out when they came up with something better. Those strange rules that caused countless debates about what they really mean and which everyone fought me tooth and nail on? Huh! There’s no way that could ever have been lost knowledge because I mean look at it! It’s all right there in the rulebooks!

Better yet, my videos on the magical combination of ‘always-on’ games, patron play, one-to-one timekeeping, and just following the rules as written – none of which I discovered, mind you – have seen comments shift subtly from “I don’t know man, that sounds weird” to “yeah *sniff* I’ve always played that way”.  It’s strange watching the culture shift from “nobody ever did that” to “everybody knows that”, and even weirder knowing that you played a small role in making that shift happen.  Regardless, it’s nice to know that we’re making a difference.  We’re helping a lot of people play better D&D, even if they don’t realize we’re the ones behind it.

And regardless of what the grifters say, they’ll never create anything as interesting as Trollopulous.  They’ll never inspire a large group of dedicated, happy warriors to launch meme after meme of goofy fun paying tribute to their tepid ideas.  Just look at these stolen shots:

There are so many actual plays going on in this shared creative endeavor that it can be hard to keep track of it all.  I certainly can’t.  The DMs can’t.  No one man can.  The best you can do is surf the blogroll and just ride the wave where it takes you.  There are odd cross-threads buried throughout these games, in some cases because one player is in a couple campaigns, and in some cases because players steal memes and ideas from each other with wild abandon.

And best of all, you can replicate this in your own games of D&D.  All you have to do is play D&D.  Gamers abandoned that idea for forty years, but the books are still there, and now we’ve shown that they are better than we ever knew.