Watching Top Gun: Maverick in the theater was a typically irritating experience. Sitting between The Texter and the Family That Brings a Full Buffet into the theater always makes for a terrible experience.  While it was nice to get out of the house, the fact that ‘out of the house’ is where the people go kinda kills the mood.

The movie is fine.  It is a throwback action film with its heart in the right place.  In a rare sign of sanity, the film-makers decided to skip the rah-rah grrl power and make the requisite injection of estrogen just one of the guys.  It made her one of the most likable femoids we’ve seen in a blockbuster in years.  Even better the film-makers decided to build the heart of the story around Maverick’s guilt over the tragic loss of his best friend, and his fumbling attempts to serve as a poor man’s replacement for Goose.  As if that isn’t enough, one of the major subplots deals with his lifetime friendship with his old rival Iceman.

I didn’t know they even made movies like this any more.

The decision to make the enemy force a generic evil nation was unobtrusive, but the utter lack of acknowledgement that the main cast consists of warriors – men who know the risks and don their armor anyway – was a bit of a hole in the movie.  The only man who expressed anything remotely like the grim acceptance of death as an acceptable price to pay to defend one’s nation is painted as a petty and callous bureaucrat.  That was odd, but not jarringly so.

With that out of the way, let’s get to the spoilers. 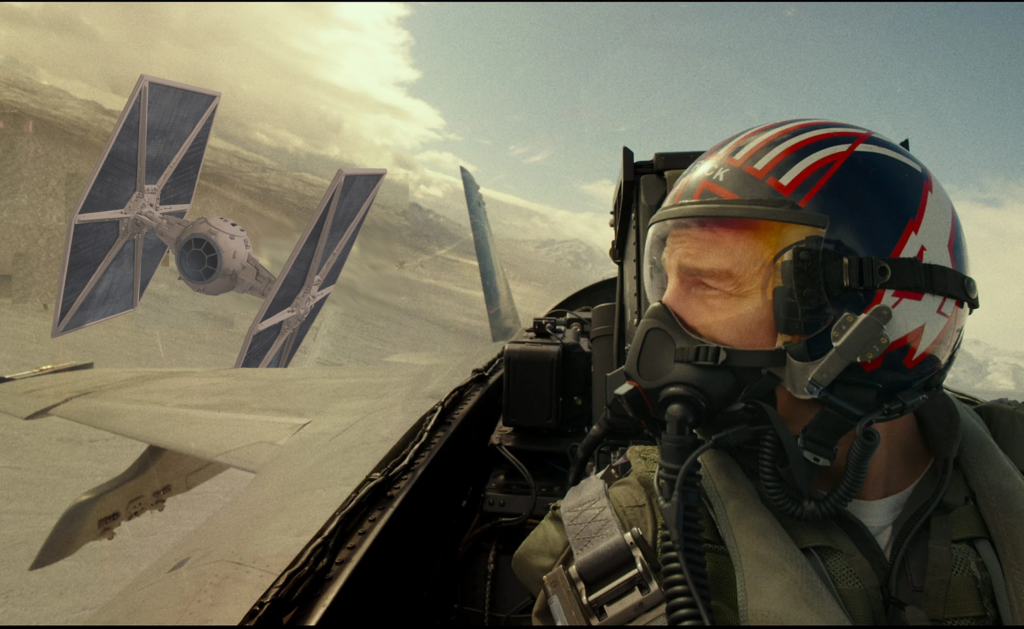 Our ragtag bunch of pilots has to fly down a trench while avoiding defense towers.  They have to blow up the doomsday device and that means the old guy blasting the shielding away from an exhaust port so that our hero can turn off his targeting computer and believe in himself hard enough to shoot the hole on his own.  They are outclassed by pilots flying better tech fighters than their own, but they make up for that with sheer pluck.  Then, when the black-masked badguy pilots are about to shoot our hero out of the sky, the guy who was kind of a jerk the whole time shows up at the last possible second to save our hero and redeem himself in everyone’s eyes.

This is not a complaint.  That’s a great storyline, and we’re cliche respecters here.  It’s cliche because it works.

The world would be a better place if they made more movies like this.

But I’ll watch them at home, thank you very much.