As a reminder, we are talking about the popular collection of rules known as One Page Rules. In my particular case, the fantasy regiment game called, appropriately enough, Regiments.

Let’s take a look and what you need to get started, and I’m just talking about the paperwork here. Once you’ve got your figures assembled, you need to cost out what you intend to field in a game.  This can lead to a lot of different permutations of the same force, but also a lot of dithering with minor points.  It’s nice to have so many options, but it takes time away from the table.

Here is the goblin cost sheet. 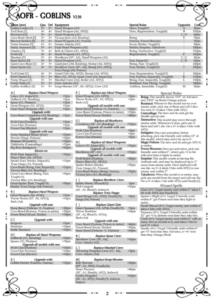 You get lots of options, all of which provide their own feel and fill thier own niche.  Noodling through the mass in the options It’s an exercise all on its own. I honestly don’t have the patience for it, and punt on the matter my routinely feeling matched forces that are nowhere near balanced.

It’s no way to run a tournament or even a friendly game, but for a solo guy? It works.

And look how good it looks on the table! 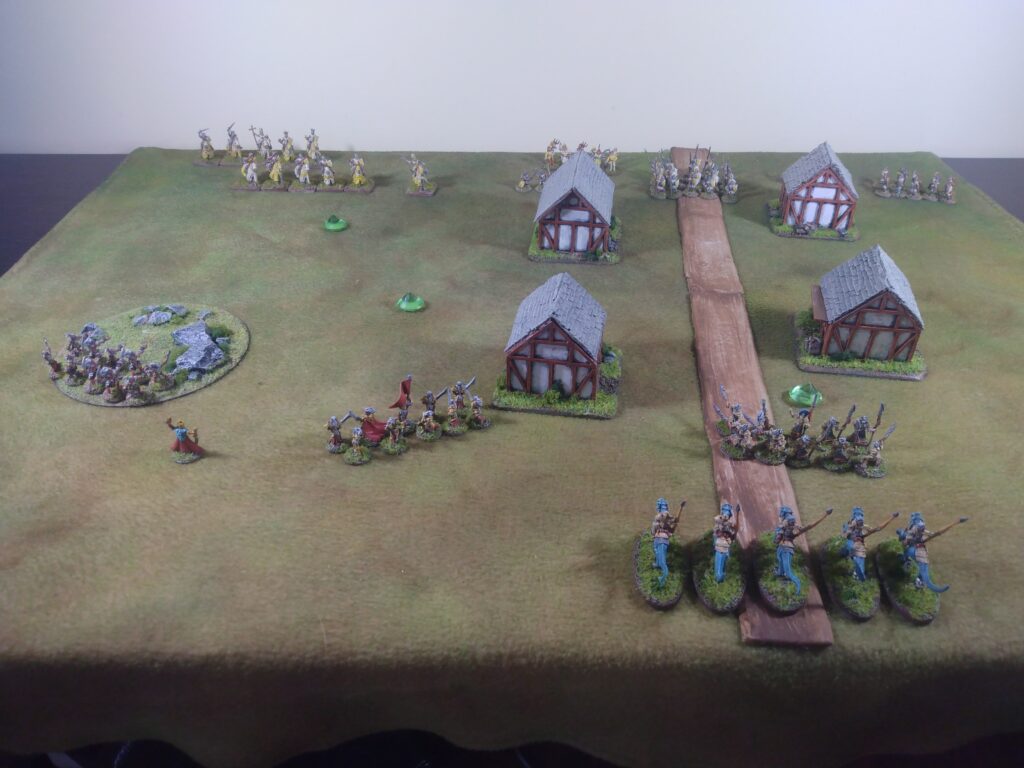 Your messy bunches of troops. No confusion about ranges or locations. Just good clean honest geometry.  This feels like a proper battle, and not just a couple of hundred guys running at each other with sharp sticks.

These are just a couple shots of a game in progress, a fight between the Dark Elves and the Broman Empire.

Once you get the pictures on the table, game flows a long very nicely.  It uses alternating activation, which limits downtime for players. It has a four-turn maximum game length, which forces players get engaged immediately. And the two hit two wound possible save system means that each combat is resolved in short order.

The difficulty enters with the copious amounts of detail in your forces. Remembering everyone’s special abilities is a challenge, even if you constantly refer back to the roster. That process slows the game down more than anything. This is in stark contrast to Dragon Rampant, where each unit has one or two abilities to remember, and they proceed naturally from the game play.

One Page Rules: Regiments is a fun game. It is one who’s possibilities I have not even begun to exhaust. It will be added to my regular rotation, if only is a way to motivate me tweak out my forces, and make my 15mm collection collection feel bigger than it does in Dragon Rampant.