The Cars.  Without them, the game would just be Wars.  I’ve played the card game, and it is not fun at all.

I’ve got ten cars arena ready.  Here are the first five along with thoughts on the design of each car. 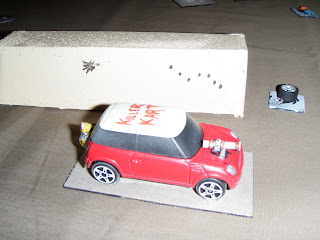 Killer Kart.  Solid, dependable little car with all the classics, a front-mount machine gun and rear mount mine dropper.  In Division 5, it’s the one car that has a machine gun, which strikes me as odd.  The machine gun is reliable, cheap, and effective.  With this model, you can even drop the minelayer and go with the low slung and brutally hard to hit Racer Model. 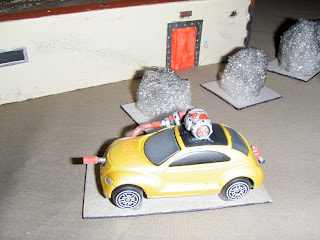 Sizzler.  For the autodeullist who loves playing with fire.  One big flamethrower and a gunner to make sure that it hits its target make this a nasty little car, even if it isn’t as maneuverable as others in the division.  That tank was stripped off of some sort of Mage Knight clicky figure, and the flaming oil dropper was its shoulderpad.  Now they serve as reservoirs for the smell of victory in the morning.  The flaming oil drop weapon is on my list of things to do. 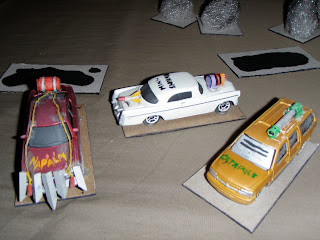 Napalm.  Twin flame throwers do as much damage as a single big one, but losing the gunner means there’s room for the Division 5 trump car – a light ram plate.

Mini-Sherman. Talk about options, this car’s got three separate weapon systems, including two rear mounts.  The name seems off to me (and not just because I screwed up the spacing on the paint job), but this should prove to be a durable little number. You can see a few puffs from its smoke dropper in the background.

Catapult.  The car for people who want to do one thing and do it well, this bruiser is almost the opposite of the Mini-Sherman.  With that one big cannon, it can dish out some serious pain, but that cannon also makes it a flashy target for everyone to gang up on.  I have doubts about this design, but it was too fun to pass up.

Next Up: Hit the Deck