This post has nothing to do with miniature wargaming.  You’ve been warned.

Big fan of college football here.  I’ve spent the last month whining and bitching and moaning like a little girl over the travesty that is an in-conference bowl game – and a national championship game no less!  This is an outrage that makes a mockery of everything that college football is supposed to stand for.  It’s the worst thing to happen to America since slavery.  And I don’t even like Oklahoma State.

Frankly, I just couldn’t be bothered to watch the title game this year.  I’ve seen LSU-Alabama and lost interest in the season after the Orange Bowl.  I wasn’t disinterested enough to start jawing with some of the guys over on a sports related message board.  One thing led to another, as these things often do, and a bet was made.  If the BCS title game had really good ratings, then I’d sport a My Little Pony avatar for six months.

I even made My Little Pony avatars for a few other posters there.  Here’s the two I made for a Georgia Tech fan: 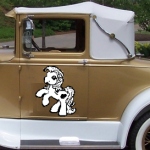 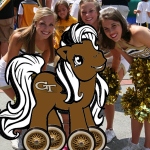 The ratings for the game were the lowest in almost a decade, if not ever.  As a statement of how seriously I take the whole thing, I’ve been wearing this thing for the last few weeks anyway.  Now that I’ve won the bet, I’m just wearing it because I can.  In the meantime, those of us that won the bet have to come up with an avatar that the SEC fans who lost the best have to wear for a month.

But the message board in question generally requires an avatar that is sports related.  This is sports related – it’s got “Team” in it!  In the event that the board rejects Team Edward, I’ve got this as a backup:

This concludes our brief interlude.  Thank you for your indulgence.