Skip to content
More Pendraken boys for the Kitchen Sink sci-fi extravaganza.  Turns out Pendraken is revamping their sci-fi line.  This first batch of dudes is Marines is SF-1, Marines in Battle Armor.  Now, I was expecting something a little more like what’s shown in this picture here.  What I got was something more like SF2, but with added faceplates and heavy shoulder pads:

I sent an email to Pendraken complaining that I got the wrong package, and their customer service asked me to double check.  Lo and behold, I went back to my already painted figures and realized…I’d already bought and painted a pack of SF-1, but never made the connection.  Here are the two types of figures next to each other for comparison:

Whoops.  The plan was to have one force of Imperial Guard style marines and one force of Space Marine style battle armored troops.  Not a big deal because I can use different caliber troops with Tomorrow’s War – some have more armor than others.  But I’m going to have to go back and make it a little more obvious on the table which ones have armor and which ones don’t.

Also, it turns out you can still get the old style heavy suited marines from Pendraken, but you have to shoot them an email.  It’s like a secret menu just for the cool kids.

I also picked up some heavy weapon teams (SF3) to add some firepower.  These are some pretty solid turrets they pack – can’t imagine them humping these into combat without some sort of transport, but they are easy to spot on the table.

And we’ll round the whole thing off with some additional support in the form of two man sniper teams.  These are from the Falklands British line (FLB-15 to be exact).  At this scale, and given that they are wearing gillie suits, they’ll blend in with the sci-fi types with no muss and no fuss. 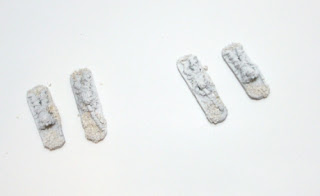