Skip to content
This past weekend I finally had everything in place to introduce my son to the glories of Necromunda by way of 15mm figures and the great big ISS Major Tom.  The process was fairly painless as the boy has a firm grounding in the basics of the GW game engine through 5e/6e Warhammer 40k.  Which meant that it only took five minutes to cover the 2e wrinkles and skirmish-specific rules for Necromunda.
To complicate/simplify things one more step, I chucked the whole background and built two gang rosters, one for the mangalorcs and one for the crew of the ship.  Every figure started out WYSIWIG, which meant that the balancing rules requiring X number of gangers, and Y number of heavies went right out the window.  The mangalorcs have three heavies (2 big stubbers and a flamer), and a lot of juves.  Both sides also started with some exotic stuff like flak vests and power swords.  We didn’t bother with gang ratings or territories, either.  We just talked through the narrative between the two games we played 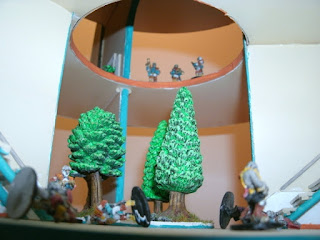 Here, my heavy gets the drop on the mangalorcs and makes them pay a heavy price for sneaking on board my ship.  Although the mangalorcs won the game, I did manage to kill one of his heavies and capture another. 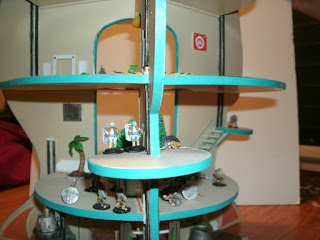 So we immediately played through a rescue scenario in which the boy made good use of the vents to get up close to the captive.  He managed to sneak up to the captive and bushwack two of my three guards at the same time.  Unfortunately for him, the now-freed captive ran straight into the mouth of my overwatching heavy who punched him full enough holes that you could use him as a colander.  The captive was freed, but did not live to enjoy his freedom for very long.

In the end, his mangalorcs put a beat down on my boys on the way out of the ship, but in the final analysis the experience favored my crew more than his raiders.  My experience and injury rolls were just what I needed, while he wound up with corpses and liabilities.  Again, we jettisoned the whole territory and gang rating section of the rules, which might balance things out fine for tournament play, but we’re just goofing around, so it works for us.

Still and all, he is eager for more, and that’s the best a wargaming father could ever ask for.

6 Comments
Making Adventure Fiction Great Again
Subscribe today to be first to hear about my new release, plus receive a copy of a free fantasy novella!
Follow