Skip to content
Today we start construction on an opponent for the KoDan Armada.  We want ships that look nothing like the human ships, so we’ll need new construction, new paint colors, and a unique look.  We’re also going to be building an alien force, so all that works together to make this fleet nothing like the first one.  Instead of straight lines and flat surfaces, this will be an organic force with ships that look grown rather than constructed.
So let’s tart with the construction material.  The bulk of our resources come in a can that looks something like this: 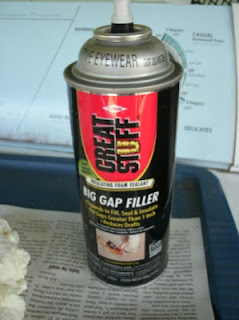 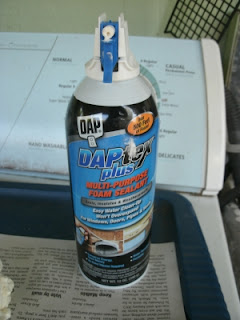 Turns out the DAPtex stuff doesn’t dry very fast, and when it dries it has no structural strength – it’s soft and spongy.  The Great Stuff…er, stuff, does dry pretty quick, and doesn’t ‘smoosh’ when dry.  This, it turns out, is why my idea to fill shampoo bottles with the stuff didn’t work – that DAPtex neer would have dried enough to allow for more conversions.

So to build the fleet, just spray a series of ‘blobs’ of this stuff onto newsprint.  Experiment a bit, go crazy with the general shape of the ships.  For the most part, I’ve used oblong designs that will help make it clear which way the ship is facing.  Be careful when you do this, though, because the foam keeps expanding for a while after you’re done spraying it.

Longer than you think – if you aren’t careful, your ships will ‘bleed’ into each other, kind of like this. 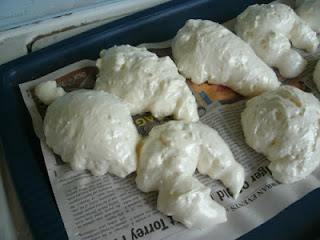 It also means your ships wind up a bit smoother in the final analysis than it looks when you finish growing/building them.  More on that next time…