Skip to content
We’re building this project from the ground up.  A bit of a departure for me, actually.  Normally I just sort of muddle through figures, rules, and terrain all in one big mish-mosh.  This time around it’s going to be rules, terrain, and finally figures.
I’m starting with Neil Thomas’ intriguing One Hour Wargame ruleset, as mentioned previously.  Neil recommends using a thirty-six inch playing surface with bases with a frontage of between four and six inches, but everything in the book is nice round numbers, so you can scale up or down to your hearts content.  (This fine fellow played a game on a board 30cm by 30cm, which google tells me is a real distance of about one foot.)
I bounced back and forth between a 36-inch field and 24-inch field and ran a whole bunch of numbers trying to be as cost effective as possible when it came to buying figure bases versus terrain bases versus box size and table size versus playing field size and then there’s…wait.  These rules are not detailed simulations where accurate figure ratios and frontage per brigade are terribly important.  The author literally says, put enough figures on each base so it “looks about right.”  I’m not constrained by anything but my own whimsy here, folks.
Well, my own whimsy, and my playing surface, which just so happens to be granite counter top a little less than 36 inches across.  Smaller could work, but let’s push the envelop and make the game as big as it can be and still fit in the One Box To Rule Them All.

It may wind up being 31 inches.  It may wind up 33.7 inches.  It doesn’t matter.  My figures are going on bases three inches across with a depth of two inches.  Maybe three inch squares depending on figure density.  Mr. Thomas recommends bases with a frontage of four to six inches for a table this size. So my troops have a little more running room around the edges. It’ll be okay.

The next question is one of material. Ideally, this would be a chance to give a teddy-bear fabric cloth a shot, but while shopping for the cloth it became clear that teddy bear fabric is just too fluffy.  It’ll take up too much room in the box.  The canvas that gets used with the sci-fi figures wrinkles like a beast, and has no nice grassy texture to it at all.  So let’s split the difference and use a nice soft terry cloth.  Terry cloth does have a nice grassy texture, and it shouldn’t wrinkle up as bad as canvas after being stuffed into a box for weeks on end. 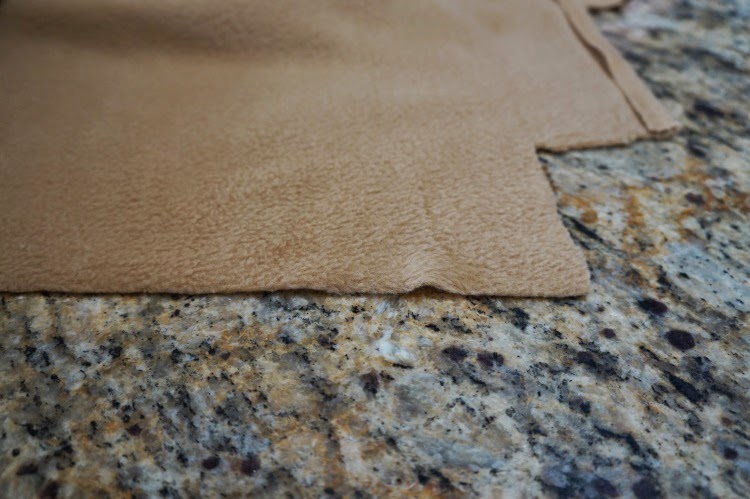 As you can see from the above, the downside is that the edges are tough to cut smooth, and they tend to fray.  That’s where marrying a crafty wife comes in handy.  My lady love stitched up seams along the edges of this piece of battleground, and…

Apparently, this fabric warps quite a bit when you sew it like this.  Erp. Well hey, no ground is truly flat.  These edges may just help break up the hard line of the edge of the world in a way that looks nice during game play.  So let’s run with this a little more.

The only other downside is that this tan fabric is too monochrome at the moment.  So the plan is to dry brush mottled green and browns into it to make it look more natural. Before that happens, I’m going to complete a couple of bases of terrain to find my colors.  Then I can pick my paint colors for the cloth to better match the rest of my terrain pieces.

The really nice thing about this set-up is that it should be really easy to customize.  If I can fit two armies and all the terrain into one box, then I can easily add a second box with two other matched armies from a whole ‘nuther era.  Toss in a single base of a built up area to match the time period, maybe some period specific fencing and scatter terrain, and then I can game multiple eras with very little extra work.  Giddyup!