Skip to content
Last time we looked at the forest base.  This time let’s look at the canopies for the still as yet unrevealed new project era.
What you’re looking at is a cheap and easy alternative to the method used by these clever chaps here.  Their forests look great, but they also look relatively expensive and time consuming.  My wrinkle on their idea is to skip the store bought foliage and use a cheaper alternative, the same green scrubbers that we all know and love from hedges around the wargaming world.

What you’re looking at here is three different steps from scrubber to treetops.  I started with a basic roundish template for both canopies, and then just started gluing scraps and tufts of scrubber to the base.  It helps to rough up the scrubber a bit with the flat edge of an exact knife.  This pulls the fibers apart and helps disguise the clean cuts you get with these scrubbers.  After letting the glue dry, I painted the canopy black, drybrushed white, and then drybrushed them with every shade of green in the box.  Here are a couple of closeups for more detail.

Note the inclusion of a few tan trees as well.  To really make the coloring pop, it helps to drybush with a faint touch of mustard yellow.

[Edit to add some advice, thanks for the reminder, arabianknight:

I couldn’t find my hot clue gun, so I just used regular white craft glue.  The craft glue works fine on the green scrubbers, you just have to lay it on thick.  You don’t want to craft glue with the clump foliage from Woodland Scenics, though, it doesn’t hold that crumbly spongy stuff for squat.

If your tree stand width is less than the width of a green scrubber, you don’t need a piece of board or cardstock underneath it.  The scrubbers have enough rigidity to hold their shape, and in fact the spongy texture will help keep the foliage from sliding around.  The larger tree stand shown here has cardstock underneath it because it is wider than the green scrubber – I glued two pieces side by side and then hid the seam by hiding it with more foliage. [/edit] 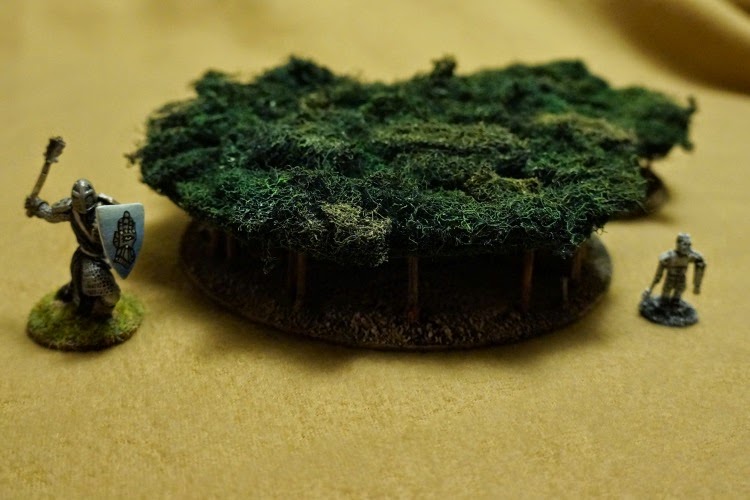 And here’s a shot for scale.  That’s a 28mm figure on the left, and a 15mm figure on the right.  These should work okay for 15mm, but are way too small for anything bigger.  On the other hand, they are perfect for my chosen scale – 6mm!

What?  A new scale?  What madness is this?

Well, it’s the madness of big battle games.  This big box is being built for One Hour Wargames, which are mostly for pushing mass infantry around a table.  If I’m going to build a mass army wargame, it going to look like mass armies.  We’ll keep collecting 15mm for skirmishing, but this box is all about the bases chock full of lots of little dudes.