Finally getting caught up on a backlog of posts.  Just way too many irons in the fires.  Too many fires, too, come to think of it.

When last we left our plucky heroes, they were heading north, ten days out of Baldur’s Gate, and still a month away from Waterdeep.  The dragonborn paladin’s cover had been blown in a fight with raiding hobgoblins, which should make for some complications down the road.

The lead wagon on day ten belonged to the Cult, and a chance broken wheel caused their load to spill out all over the roadside – gold and gems.  The party quickly arrived, warned the caravan master he should keep a sharp eye on that wagon, and noted a guard from another wagon’s eye light up as he spotted the treasure.  The cultists quickly scooped up the gold, including an embossed chalice they had stolen from Greenest back in Session 1, and waved off all attempts at help.

That night the weather turned foul, but the caravan was slated for a brief stop at a lonely inn way out in the wilderness.  They entered to make arrangements, but found an apologetic tavern keeper trying to shoo them out the door as five foppish noblemen taunted the rough edged travelers.  While the party didn’t want a fight, they refused to back down and quit the dry confines of the tavern.

As everybody geared up for a fight, the noblemen showed their true colors.  The leader’s skin split down the middle like a snake shedding its skin, and a massive slaad burst forth. His four friends, and the poor tavernkeep, also burst at the chest as baby slaads leaped forth. 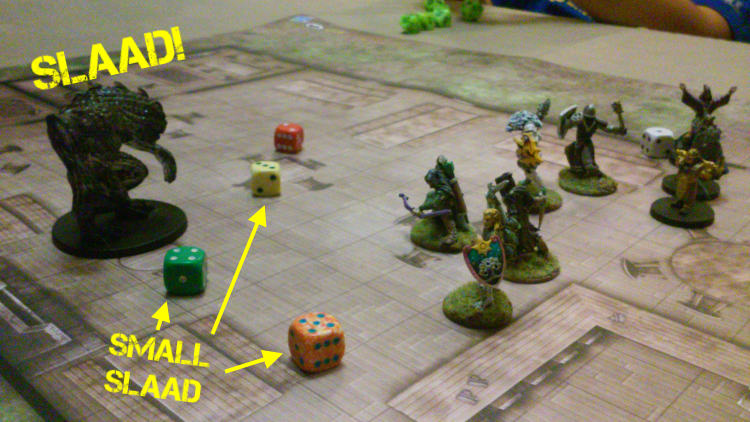 Turns out slaad regenerate and are immune to most magic based and all elemental based attacks.  Which meant round after round of pummeling the big daddy.  Karren nuked most of the babies with a blast of electric breath.  The guards from other wagons were of no use – they ran and hid.  Just as the fight started to look like a quick one, Grim made an almost fatal error.  In an effort to hid behind the bar, the better to shoot from ambush and triple his damage, he unwittingly called the attention of a second slaad hiding in the kitchen. 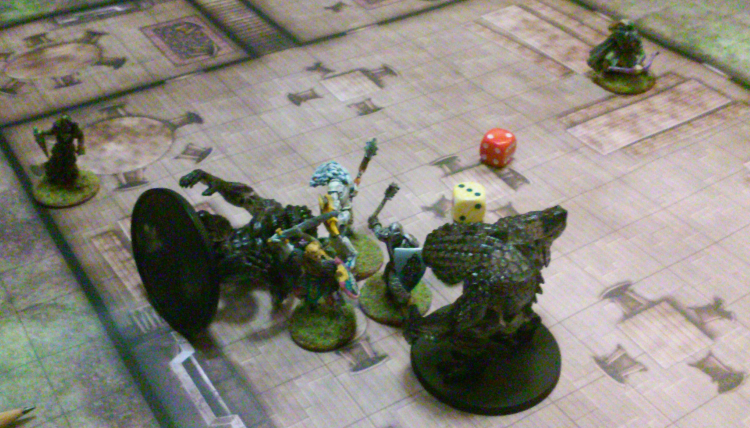 Nothing for it then, Grim commenced dancing all around the tavern, leaping on tables, shooting from behind anything he could.  Gilgamesh dove into the fray with his little knife and 12 HP, just for a bit, but what a bit.  He had a melee attack spell that nuked the Daddy slaad’s regeneration just long enough for the party to put it down once and for all.
Momma slaad fought the good fight, but now outnumbered and unable to score enough damage to bring down the key damage soak for the party (Yolo the meat shield sword and board fighter), her doom was inevitable.
Coming soon:  Session 8, Part Two
Making Adventure Fiction Great Again
Subscribe today to be first to hear about my new release, plus receive a copy of a free fantasy novella!
Follow