When last we left the good people of the Targan Empire, their border towns and forts had been over-run by a sudden invasion of the dark forces of the nearby kingdom of the Necromancer King.  The Patriarch of the Empire, High King Sisterbanger, quickly dispatched a small delaying force to buy enough time to scrape together an army that could repel the repellent invading host.  For their part, the Necromancer King’s forces pushed deeper into the Targar Empire along a broad front, encountering only scattered resistance.  The two forces would meet along the road, screened from each other by the early dawn light and a small fortified farmstead straddling the dirt track.

In game terms, we rolled a d30 to randomly determine the scenario and starting forces.  The scenario would be a sort of king-of-the-hill – whoever holds the farm after Turn 15 wins.  We each started the game with three knights, the Targar supplemented by two bows and a man-at-arms unit, the Necromancer King by two men-at-arms and a levy.  Both forces are unaware of each other and must move up the road until one hits the farm.

The delaying force, led by Lady Hotfor M’Motherson, eager for a morning break, pushed on just slightly faster to the farm. 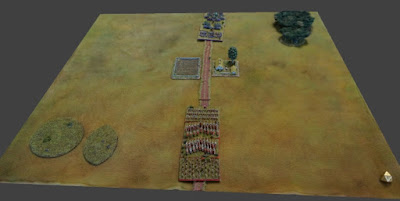 Again, in game terms, the Necromancer King won the last game, so he got to choose which force to be.  For some reason, he chose to go second, giving the initiative to the defenders.

Once the lead element of the Targars hit the farm, a man-at-arms unit, all hell broke loose.  While the Targars held the farm, they were slower to deploy the following forces.
﻿

Lady M’Motherson, safely ensconced with her royal guard in the farm’s courtyard ordered the archers to secure the right flank, and her flying knights to hit the enemy hard on the left.

The Necromancer King matched the maneuver, and hundreds of heavily armed mounted men collided with the sound of a crashing freight train.  The Lord of the Dead slightly misjudged the speed of his rightmost knights, though – leaving the Targars with a three to two advantage.  The Third Thrall Knights couldn’t mass a decent charge, and wound up waiting in reserve.
﻿

The fight on the Targar Left ground on for hours, with massive charge and counter charge.  On the right, the ground troops swarmed in a chaotic mess.  The archers had time for but one volley, as the slave knights and undead hordes made good use of the outer farm buildings to screen their approach.

At last, the mess on the Target Left began to sort itself out.  Although both armies destroyed one unit of knights as an effective battlefield presence, the Necromancer King’s forces took heavy losses.  On the left, the Targar archers fought like wildmen, driving off the skeletal levies.

The Necromancer King would not quit the field, however.  In a clever move, he was able to lure the Second Targar Knights into a classic pincer trap, destroying them between two units of knights and a man-at-arms unit.

The problem with that ploy quickly showed itself, though, as the First Targar was able to use the time given them by the Undead King’s trap to drive hard into the rear of the Necromancer King’s First Knights.

Again, the tides of battle would change, as the last of the Targar Knights, the glory of her youth, would perish under the cruel lances of the Necormancer King’s Own Knights.  Having dispatched his immediate foe, the King surveyed the field of battle.  To his consternation, the man-at-arms on his left had recently dissolved, leaving his left flank exposed.

Nothing for it, the King spurred his men on to a last, glorious charge for the archers…

Who never even had time to fire off a shot.  Too slow in getting into position, they found themselves overrun by dark lord’s surviving forces.  Desperately they fought, hoping if nothing else to buy time for the Lady M’Motherson to fortify the farm.  The sun was quickly moving across the sky, and if the Necromancer could not extract the Targars from that farm by the end of the day, his own armies would be slowed in their march on the capital of the Targar Empire.  Although the farm was no fortress, he could ill afford the time necessary to lay siege to it, nor could he allow the sizable strike force inside to harry his supply trains and rear guard forces.
﻿

His knight’s massive charge obliterated the first of the two archers between him and the farm, but his weakened men-at-arms could not stand against even the lightly armed archers.  After a long day of running about, they fell to the Targars.

The Second Targar archers hoped to stand tall and delay the Necromancer King’s army for even a few hours, but their karma had run out.  Archers might be able to dish out enough damage to slow or weaken a foe, but in a one-on-one fight with knights, the outcome is inevitable.

So it came down to this.  After all that sound and fury it would be the Necromancer King’s lead general against Lady M’Motherson herself.  For long hours the knights swarmed the walls of the farm, but the heavily armored men-at-arms, and the defensive walls they guarded, were too tough a nut to crack.

With a last gasp, as the last rays of sun touched the field, the Necromancer King’s knights threw their weight at the walls…

The game would be decided with a last throw of the dice.  The boys in purple and green could only win with a 6.  Any other result would see the Red and Gold of the Targars win the day…

No such luck.  A harrowing fight, but in the end, the combined defense of a men-at-arms unit in heavy cover was just too much for the Necromancer King.  His forces had been turned back at this one lowly farm, but elsewhere along the front, his armies march uncontested.  Would this farm provide a useful jumping-off point for attacks on the Undead Lord’s flanks?  Would it prove a short-term but ultimately fruitless set-back for the Undead King?

Stay tuned for the next thrilling fight…

Before that, though, I’ll have to write up a review of Osprey’s Black Ops, which came in the mail earlier this week.