Vassal is one of those tabletop simulators that is all the rage these days, and during the course of tinkering with it one thing led to another and the next thing I knew Cal Arath Junior had been usurped from his father’s throne.  This time around he wound up being dumped by his loyal servant high in the mountains above the Tragoth River. 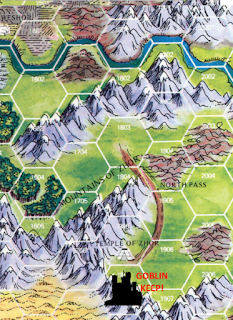 Junior had a much easier time getting across the river, and was smart enough to stop after a week in the foothills north of the Mountains of Zohr where he spent a week hunting, resting, and recovering from near starvation.

One day he met a dwarf, but the surly miner cared nothing for the troubles of a lost barbarian prince and never paused in his journey.  Good riddance to bad rubbish so far as Cal was concerned.

Feeling much revived, he journeyed down to the Temple of Zohr where he fell in with a bad crowd.  His first night at the Temple, the convinced him to aid them in an attempt to steal a large sum of money from the poor box.

Being the quick and clever sort, Cal Junior pulled down a cool 200gp, of which he kept 180.  (Ten percent to the thieves guild is only proper.)  He then hot-footed it south where the next day he wandered into a swarm of goblins patrolling the region around their keep.  Allies of the Temple, tipped off by the angry priests?  Unlikely, as Cal Junior fled back to the Temple, where no one was any the wiser.  After securing more provisions, he decided to head north. 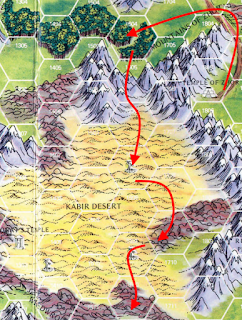 Eager for adventure he chose to pass around the Zohr Mountains and into the Kabir desert where he wandered lost for many a day.   Only the presence of a few small oases where he could rest and eat his fill saved him from exhaustion.  Hills on the horizon promised relief from the heat, and meat in the form of wild goats down from the mountains.  They also offered a perilous journey through a maze of canyons and a day spent edging along narrow gorge-side cliffs.  Cal Junior survived, but decided the desert was no place for him.

So he wandered south, and after a week had finally left the desert behind him.  A full month of wandering had done nothing but deplete his supplies, so he decided to set out for civilization.  An old ally of his father’s lived in a castle to the southwest.  Perhaps the lord of Castle Huldra would help his old ally’s second son?

Alas, the lord had died, and his son still remembered the summer spent at band camp with Cal Junior.  Now the shoe was on the other foot, Cal’s former victim became the tormentor and had the orphan barbarian whipped and banished from the castle.  To return would spell Cal Junior’s death. 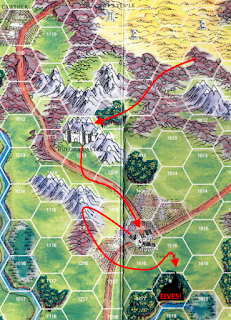 With no better options available Cal Junior set off south along the road where he encountered a wandering mendicant who had heard from the Temple of Zohr that thieves were loose in the north and not to trust strangers on the road.  The mendicant passed with barely a head nod.

The next day Cal Junior heard the cry of a band of three elves, also headed south, who bade him follow.  The closest thing to a friendly face that Cal Junior had seen in this Godsforsaken southland, he spent a full week following them along circuitous paths through fields, mountains, hills, and at last to the gates of an Elven Castle on the north bank of the Dienstal Branch of a great river.

Once inside, the gates of the castle boomed shut behind him, and Cal Arath Junior turned to find a large host of elven warriors, blades drawn.  The perfidious elves had heard the clink of gold in his heavy pack, and decided to lead him on a merry chase, exhaust his supplies, and lead him straight into a trap.  The elves stole his food, his money, and clapped him in the dungeon where he tried in vain to escape for more than a week.  At last, a full seventy days since his adventure began, Cal Arath Junior lost hope.  Even if he could escape, the plotters had surely consolidated power leaving him no hope.  And so he spent the last of his days waiting in vain for a barrel riding halfling to help him escape.

This playthrough certainly started off better than the last.  Cal Arath Junior survived the full 70 days and at one point was up to 180gp, over a third of the way to his goal.  Although he met plenty of characters, he didn’t get into a single scrap.  His luck held for escaping most encounters by flight or disinterest on the part of those he met.

This playthrough took a little over one hour.  No combat and straightforward encounters really sped up play, as did the digital platform.  It’s certainly a more convenient way to play, but you lose something by pushing a mouse around – that tactile interaction with the game itself has an appeal all its own.  Maybe it’s nostalgia, but for whatever reason, Cal Arath III’s adventure will take place in meat space.