Four trees, actually.  Nine more pieces of scatter terrain – what the cool kids are calling street furniture these day – have been added to the table for cover. 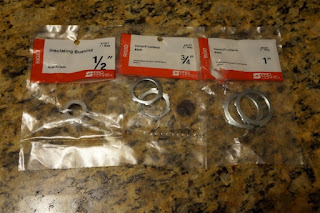 When it comes to small bits of raw material for scratch-building, the electric aisle of your local hardware store is your friend.  Today’s project consists of nine planter boxes.  The larger tree planters started out as six roughly one inch diameter plain wooden disks purchased at the craft store.  Two of them were double up to give a slightly taller planter box, and then the four metal washers were glued on top of those.  They come in a wide variety of diameter and height, so you can pick and choose just the right ones for your terrain – they make sizes that would work just as well for the big 25’s. 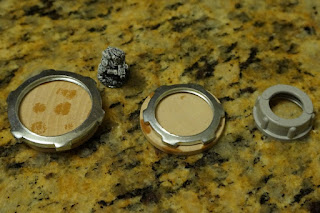 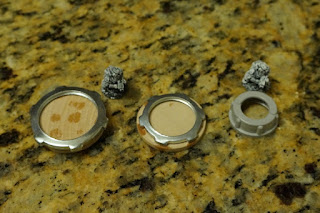 The smaller plastic nuts are used pretty much as-is.  Each had some molded ID’s on top that needed to be trimmed off, then a small disc of cereal package cardboard was glued up underneath the inner lip of the threaded part.

The actual trees were plastic Toob Trees left over from previous projects, glued in place with PVC glue.  After drying, the inside of each planter was covered in craft glue and fine sand for a decent earthen texture. 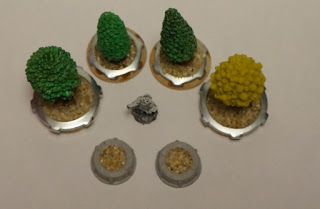 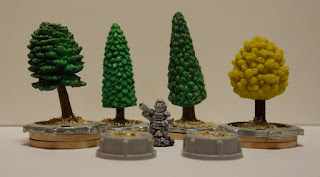 The whole lot was painted in one fell swoop.  After painting, the ground covering plants were added.  The bushes are standard modelling fluff you can find at any decent hobby shop, and the flowers cheap plastics off a $1.50 strand.

In the end each planter cost about a dollar each, and the whole lot was assembled in an hours, base coated and allowed to dry overnight, and then painted and table-ready in a second one hour session.

The concrete of the planters was painted to match the surrounding buildings, and the flowers given a suitably alien blue and purple hue. The foliage could have been painted to match, but I’m looking for a near-earth parallel here, not an over-the-top cartoonishly alien planet.