Skip to content
﻿
In a Black Ops battle featuring two newly painted forces, a small Octopod task force has been discovered operating deep inside Prang!* territory.  The 12 man group of conscripts including one leader (Ace) and one RPG toting heavy (for a total of 54 points) have regrouped inside a small park.  Meanwhile, a 9 man group of Prang! featuring a leader (Ace), two GPMG toting heavies, and six troopers (for a total of 73 points) have boxed them in, and look to wipe them out.
The octopod forces win by exiting half their number off board by the end of turn 5, if they fail to do so, the Prang! mission will succeed. 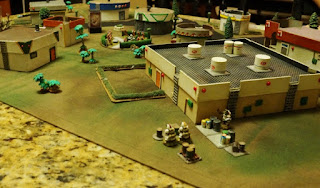 The Prang! drew the bulk of the early cards, giving them a chance to move into position and set up a few test shots.

But the mid-deck cards come up all octopod, and with escape just four moves away, they waste no time running to the northwest.

The Prang edges around, plinking away where they could, and inflicting a few casualties along the way.  They had really hoped to draw the cards that would give them held actions, but it wasn’t meant to be.

Leading the way as a good leader does, the octopod Ace was the first octo off the board.  It might have been better to stay behind and issue orders to move the troopers along faster, but at 14 points, the leader model represented almost half the points needed for victory.
The Prang! did manage to set up a few decent shots near the edge of the battlefield, but opted for kill shots instead of suppression shots.  The difficulty of firing on the move at figures behind cover proved too much for the Prang!, who were only able to knock out five of the low cost troopers.

In the end, the octopods managed to clear 34 points worth of models off board by the end of turn 2.

Take home lessons:
* I don’t know why, there’s something about the Prang! that just makes me want to add an exclamation point to the end of the word.  Maybe it’s onomatopoeia-esque ﻿nature of the word.  Whatever, get used to seeing it written that way around these parts.
3 Comments
Making Adventure Fiction Great Again
Subscribe today to be first to hear about my new release, plus receive a copy of a free fantasy novella!
Follow