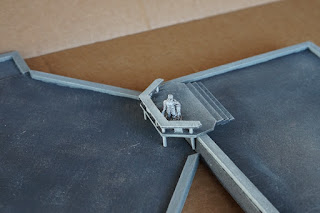 The only thing worse than adversaries attacking you from elevation is when you can’t immediately access that elevation yourself.  The half-a-level rooms of my dungeon were designed to allow for one room to overlook the room below.  Open doorways dropping ten feet to the room below are against fantasy-OSHA regulations, though, so I built some fall protection in the form of a nice protruding balcony.

You like the additional architectural touch of raising the balcony up a bit by adding a flight of access steps?  Purely unintentional.  When I first built the thing, I measured from the tabletop to the floor, forgetting that this balcony would be resting on the floor of the room below – a full 5mm above the tabletop. Rather than cutting the supports, which would have meant the balcony was just 5mm above the floor, I added the steps to give it a little more vertical difference. 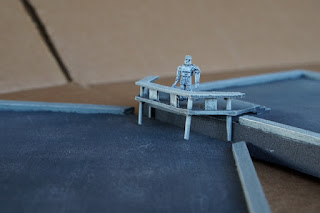 The difference in thickness of the rooms is only 5mm, so that extra 5mm still leaves the balcony only 10mm above floor height.  About shoulder height compared to the standard miniature.  Just as the scaling of the furniture and the whole dungeon is a little off, I figure the vertical scaling is off by a factor of two as well.  That balcony should be considered 10 feet off the ground.  In true scale that would be two to three inches.  Highly impractical given the limitations of the one box.

The railing height is pretty good though.  Should meet fantasy-OSHA standards of 39 to 42 inches above the ground surface.  (Guess who wears the safety hat as part of his day job.)