This field update comes to you from the heart of the State of Jefferson.  (It’s currently known as Northern California, but from the yard signs seen around the area that’s subject to change as soon as the locals get a say in state politics…don’t hold your breath, the big metroplexes that run California ain’t giving up all that tax revenue or all those water sources any time soon.)

Chico is the big local city, about 100,000 people, located at the far northern tip of California’s central valley.  Although not a huge city, it dwarfs the towns and villages that serve the largely agricultural area.  It is also home to two university’s, so there’s a large enough contingent of gaming’s target market to support at least one game shop.  That would be ‘Bat Comics and Games’ located on the downtown strip. 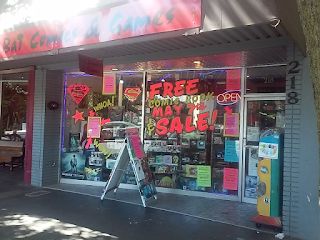 Inside is mostly comics and general nerd paraphernalia, with one wall of gaming supplies.  No gaming space, which strikes me as odd, but this is primarily a comic store.  That may be a good sign, indicating more gaming groups doing their thing at home rather than the weekly mini-conventions that dominate gaming in my home town.   They had a couple of feet of older discounted products on the shelf, so there’s some opportunity for finding that rare ouit of print gem, but nothing that caught my eye.The staff was friendly and helpful, and parking was easy even on a Saturday morning.
They didn’t have any of my preferred product in stock, but 15mm fantasy in one of those strange little niche products that make me feel like a hipster when asking about it.  (“I only drink craft beer and listen to bands you’ve never heard of, too.  *sniff* “)  One great little feature is a glass case full of the most random assortment of miniatures I’ve seen in person in a long time.  Old Partha true-25mm fantasy, plastic pre-paints, and a host of them I can’t even identify.  They had these cute little guys that I couldn’t pass up for just a buck each. 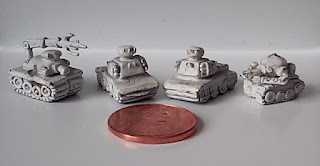 They are a little cartoony, but that fits great with the pulpy feel I’ve been pushing in my sci-fi.  They should make great little unmanned drones and patrol bots in15mm sci-fi games. Only a buck each, and no shipping costs for once.

All in all, Bat Comics and Games is worth a quick stop if you’re ever in the area.