With the new and improved 15mm fantasy table largely completed, it’s time to break out the miniatures!  With a little help from my lovely assistant, we threw together a small force of seven human defenders trying to keep an ogre and his goblins out of town.  The ogre wanted to get his shaman into the cemetery to perform some blasphemous rite, and the humans wanted to stop them.  The game was a simple 300pt battle using the excellent Song of Blades and Heroes rules.

The local lord took his retainers out to investigate a diversion, but returned in time to find the ogre chief and his minions just sneaking into town.

Although badly outnumbered, the humans had the advantage of better motivation and leadership.  They seized the initiative and never really let go.  They quickly raced up and took hold of the cemetery, which denied the goblins a key advantage.  Had they grabbed it first, their shaman would have made for a powerful piece of artillery during the fight. 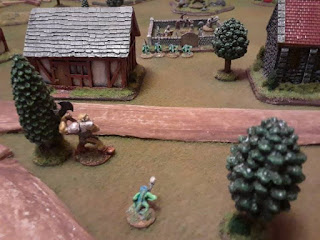 The ogre made the tactical blunder of sending his troops in piecemeal instead of waiting and slowly marshalling his forces.  His vanguard was meant to slow down the humans, but just wound up getting destroyed by a combination of flanking fire followed by a hammerblow of melee. 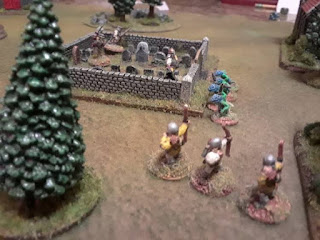 By the time the big man himself could get into the action it was too late to do anything except get swarmed.  Four on one isn’t a fight anyone is likely to win in SoBH. 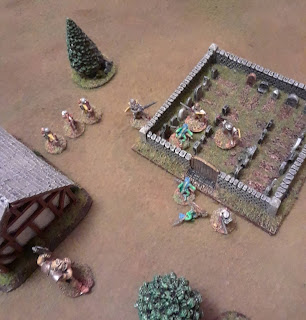 And brought low by the weaker but better coordinated humans.  His goblin champ never got within smelling distance of the fight.  None of the goblins on the wings could muster the gumption to move into town, which meant the ogre basically traded away his one advantage.  He should have left them lumped together and used marching orders to get them all stuck in and swarming the humans.  A valuable lesson for the next game of SoBH. 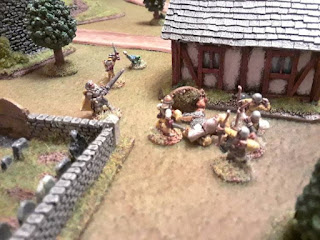