With apologies to the Ohioans out there – it might be a fine university, but a bowling green makes for a bland wargaming table.  With very little room left in my One Fantasy Box to Bind Them All And In the Dark Closet Rule Them, grand topographic chances are off the table (heh).  That doesn’t mean we can’t spruce things up with some nice terrain blocking templates that also help to funnel figures around and even make for some interesting defensive challenges.

These three small hillocks were carved out of one plain round piece of Styrofoam picked up for a couple bucks at the craft store.  The slopes are just low enough to allow figures to stand almost anywhere on the terrain piece, and they were painted to match the hill on which the Nameless Tower stands – a small touch that helps unify the table theme. 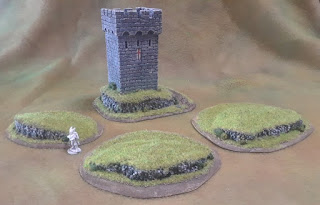 As you can see, the overall elevation difference is less than 15mm including the terrain base, so they can be treated as a linear obstacle for climbing purposes, or the players can agree that they are not to scale, and that these little cliffs actually block all movement.  In that way you can even have a couple of short canyons to funnel troops through. 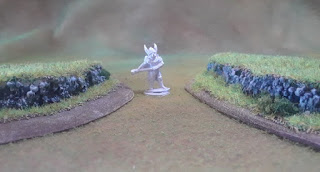 Oh man, I’m working on something big right now, but I can’t show you what it is.  A huge project compared to my usual, but I don’t want to ruin the surprise for my players, so posting might be lighter than usual here despite increased output.  Maybe I’ll be able to share the photos with you as a Christmas Surprise.  If you don’t already follow this blog, now’s a good time to subscribe so you don’t miss it.
Making Adventure Fiction Great Again
Subscribe today to be first to hear about my new release, plus receive a copy of a free fantasy novella!
Follow