Skip to content
I lied.  In my last post, I promised a big new project for 2018, but after a conversation with a good friend, I tabled that big complex for something a little more intimate and a lot more likely to see some actual gaming time.
Behold!
What you’re looking at here is the start of a new terrain system built for 10mm skirmishing.  Right now the shoe-box sized system has just four small terrain items.  As you can see, we have a bit of broken ground, a small house with six 2.5-inch hedge pieces, a small wood, and a stream.  The round terrain pieces are based on CDs, and the stream on 1/4-inch MDF.  The stream has both a bridge on the left and a ford on the right, and the odd angles to either side allow this piece to be placed on the corner of the terrain mat (forthcoming). 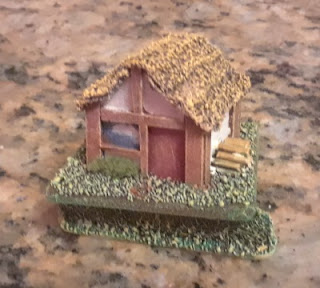 The house is a small, wooden, children’s toy block.  The kind with the raised and painted letters on the side.  I trimmed down the corners a bit and fixed cardstock to the front and back, then used balsa strips for trim and cut pieces of towel for the roof. A small woodpile and some bushes add a ‘lived in’ look to the small hut.
Here’s the kicker.  I’m building four of these sets.

While clearing out some older unused wargame items, I realized that I could break up my collection of 10mm fantasy figures into four identical groups of figures.  Why am I doing this?  You can probably guess, but I’m not giving the full reveal because I don’t want to spoil the surprise.

Stay tuned, loyal readers, it’s going to be a great year for wargaing.