Skip to content
Last post I showed you my current project’s status.  For those new to Chateau Abox, I’m building four identical game sets, so that I can do some online wargaming with a tactical component.  If you ain’t pushing lead, you ain’t miniature wargaming, after all.  By using 10mm figures already in hand, and not already in use, I was able to put together a fun little set.
﻿ 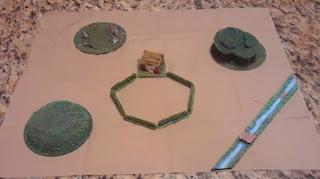 This all fits inside a small shoebox sized plastic tub, along with the figures:﻿ 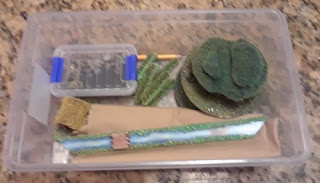 Opening up the blue-handled box, we see the small host of random figures: 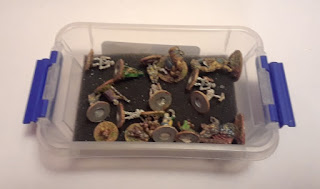 Which parts out to a 5-man adventuring party, two ogres with four orc slaves, a minotaur and his three man dog-head retinue, and five skeleton warriors.  Not bad, but needs more Dakka.  I’ve got another 40 figures per box on order from Irregular that will really round this out and make this box sing.  You’ll see.

One thing to point out is that the adventuring parties all consist of a wizard, an elf, a sword and board human, a dwarf axeman, and a hobbit.  They aren’t the same fighters, they aren’t the same elfs, and they definitely aren’t the same wizards.  For example, one wizard is basically Gandalf and another a fire-wizard, and the one shown is more necromancer than anything else. Eh, close enough for 10mm figures shot on camera, right?  This whole thing is a little more abstract than is my usual wont.

That said, I’ll have to make sure my planned wizard towers match the figures.  Did I mention the wizard towers?  Oh yeah, we need some serious fantasy terrain to really make this special, and we’re going to get ’em.