The first game of the Adventures of the Blackraven has come and gone.

In this project, I used the campaign tables from Five Parsecs from Home to generate the quartet of space faring ne’er-do-wells plying the shipping and smuggling routes way out on the fringes.  Once I had personalities and rough characteristics done, I shifted over to Void Pirates  built out a 55 point crew from there.

From right to left we’ve got: 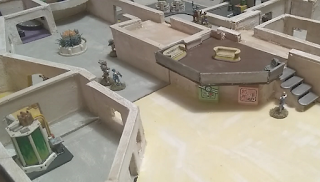 The preliminary fun presents Cobalt and Co. strong-armed by a Unity agent into finding the most important alien baby in the universe.  He hits up the Tortugastra, a little space station out on the Fringe, to meet a contact, and discovers that a mercenary unit out of the Pelagic system has beat him to the literal punch.  After some heated words, a fight breaks out in the quiet morning halls. 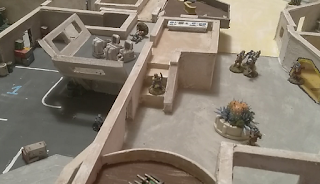 After a furious fight in the halls, curiously absent of security forces most likely due to the Pelagics buying them off, Cobalt-15 managed to put all of the mercs on the floor with only Rusty taking it on the chin.  The former slave/miner took a bad wound and will be lame and gumpy for the next scenario.  On the upshot, Cobalt got the info he needed and the next mission will determine whether he gets closer to finding the important magic alien baby…
And whether or not he should turn the magic alien baby over to the Unity once he does.
Expect a live-play video to go live over at the Joy of Wargaming on July 21st!  We’re up to 40 subscribers already, which has been very gratifying – thanks to all of you who have jumped on board over the last few weeks.  It’s been a lot of fun.
Making Adventure Fiction Great Again
Subscribe today to be first to hear about my new release, plus receive a copy of a free fantasy novella!
Follow