Picked up a batch of the “Mad Ron” road warrior vehicles from Irregular Miniatures on a whim.  Just look at these tiny little knights of the road:

Still have to paint those motorcycles, and the big dang semi-trailer slash war-rig.  The good news is that terrain is already done.  I’ve got the little city all laid out and ready for some vehicular mayhem.  These are perfectly scaled to the terrain set-up that I’ve got for Riot!
The only issue that gives me pause is that the gauges I ordered are N-scale which maps to 18mm figures, and these little rugged adventurers are in 6mm scale.  Normally I’d be fine with this.  I use smaller scale figures all the time.  Most wargames use a very reduced ground-scale compared to the figure scale.  This should solve my biggest complaint with Gaslands – that even in sixth gear the cars only move about four carlengths per turn.  The speeds just don’t feel right when you watch live plays, and don’t get me started on the weapon ranges.
I’m also glad to make it harder to ram.  Tagging a vehicle that is actively dodging you at full speed isn’t as easy as most rule-sets make it out to be.  This should reduce the numbers of collisions and make the game more about the racing and shooting and less about trying to notch that one big RAM attack.
But there are other considerations here, for sure.  I just don’t know what they are, and won’t until I get some lead on the table.
Stay tuned!
In the meantime, enjoy some additional eye candy: 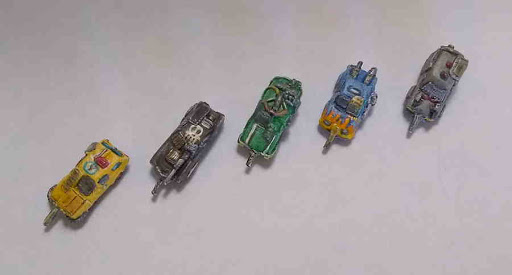 My cars are painted in considerably more day-glo colors than most of what you see on the YouTube reports.  Everyone favors a black matte coat, a bit of gray and metal and rust drybrushing, and then they call it done.  With vehicles this size, I don’t have the luxury of a monochrome schema.    You need those colors to help identify the cars at a distance.

Not sure you can see it, but that bike on the right is carrying three guys and a big-ol’ cannon. 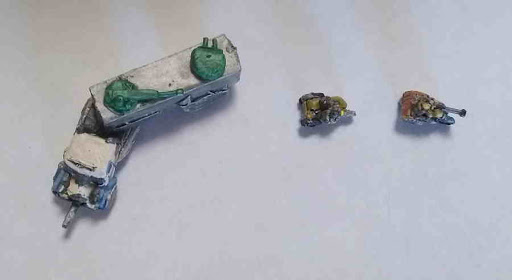