Not everything sucks, and I’ve found a rare gem in this modern cinematic wasteland.  Imagine if Fargo was set in a small New England fishing town, and it wasn’t completely retarded.  Don’t let the “Amazon Original” tag fool you – this one is worth a watch.

The film opens with the great David Coffin singing the titular song accompanied by an a cappella chorus of salty old dogs.  It’s both a clever way to establish the setting and a stirring rebuke to those who mouth the lie, “white people have no culture”.  If you aren’t familiar with David Coffin, take a moment to bask in the strength and lament that characterizes the sea shanties of the English speaking world.

The movie gets two bonus stars from me just for this, but it’s only a harbinger of things to come.  The basic plot revolves around two sisters struggling in the immediate aftermath of their mother’s death.  It turns out dear ol’ mum was embroiled in the seedy underbelly of their hometown.  They don’t actually learn about her involvement until the younger sister has a run-in with a local thug that kicks off the dramatic adventure that follows.  That’s all the plot you get from me – the revelations come fast and furious and the crime drama that follows take a lot of curious twists and turns that don’t stop until the final shot. 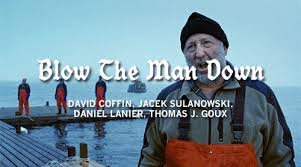 One thing that deserves a special mention is that this is a prime example of how to make a female-centric film that doesn’t suck.  Gritty and real and down to earth, this film has some bloody violence, but it doesn’t have any manic pixie ninja girls beating up teams of military special forces.  It has a lot of smart and calculating women acting in smart and calculating ways.  The cop trying to unravel the ongoing criminal activity finds himself always one step behind, but only because he is reacting to the women, and operating with even less information than any of the female factions.  He isn’t stupid or naive, he’s just a lingering threat and an  additional perspective to help track who knows what and when.

It’s also worth mentioning that the producers made the astonishing decision not to shoe-horn in the obligatory forced diversity.  The town is as white as the snow and fog that plague it, and it works.  It helps establish that we’re entering the heart of a small town where things change slow and the outside world serves as little more than an afterthought.  It’s just one small touch among a dozen that profoundly impact the experience and keeps the viewer enmeshed in the plot rather than dragged out of it by a reminder of current world politics.

It’s available on Amazon.com.  Go watch it – you won’t regret it.