With the painting out of the way, let’s take a look at what 2mm figures look like on the table. 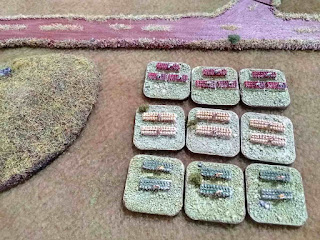 But first, here is a side-by-side shot of the Great Traffic Light Alliance, with British on top and Austrian in the middle and Russians on the bottom row.

Any serious wargamer would chafe at the oddities of these line infantry.  Any wise wargamer would understand that the pieces are representative – we’re going to be using these guys for everything from the Marlborough Ear to Seven Years War and maybe even a little Napoleonics.  That’s a pretty wide swath of history that saw a lot of refinements in battle field tactics.

My armies are hampered a little by the decision to purchase army packs that work great for one specific era.  Using them for a broader than intended sweep means sacrificing purity for flexibility, a sacrifice that I am willing to make for the cause of good gaming.

And here is a good shot of how easy it becomes to recognize friend from foe on the table.  Ignore the massively out of scale roads.  (It makes me smile to think of 6mm terrain as way too big.)  Instead, note that the Austrians and Russians are easy to tell apart.  So too with the difference between cavalry and line infantry, with even a little cannon holding the giant crossroads easily distinguished by its unique appearance. 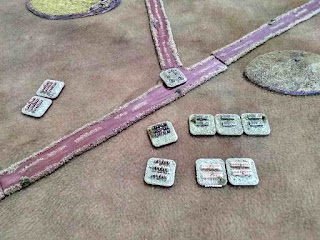 While I’m not yet a 2mm supremacist, this project has been very fulfilling.  It’s a new scale for me, and the game scale – full Corps represented by around 20 elements – offers new challenges and a fresh approach to big battles over that of the usual “Rank and Flank” style games.

Don’t be intimidated by their size – these guys are great.

All my figures to date are from Irregular Miniatures.  They don’t have a massive line of figures, but it’s the biggest around (heh) and at this scale figures are extremely flexible.  It wouldn’t be much of a stretch to choose some fantastic colors and name the blocks shown above as orcs or elves!