The Trossian War campaign offers a lot of possibilities for narrative fun and complications, but I repeat myself.  It uses Featherstonian “Chance” cards to add a level of…uh, chance…to the proceedings, some of which offer the possibility of adding third party elements to your forces.  Painted up in the Imperial purple, these bases can also be used as rebellious militia, or even an expeditionary force from outside the Trossian continent! 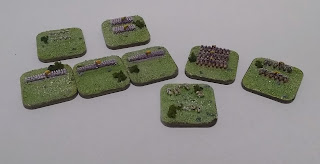 It’s not a large force, worth only around 20AP, but that’s half the size of a normal army used in a bog-standard non-campaign game of 2×2 Napoleonics.  Three line infantry and one each of grenadiers, light infantry, heavy and light cavalry, and one HQ.

The left over pieces of the army groups provided enough material to create a small wagon train (left) and a military HQ.  These will be nice if the events of the campaign lead to a raid on a supply train or a ‘capture the general’ style battle.
The set includes one final little ‘capture the flag’ marker.  Below you can see the square fields surrounded by hedges.  Irregular sells those hedges in line, but they are very small and perfectly sized to create a pair of small pastures.  Can’t have a pasture without livestock, so I bought a flock of sheep from Irregular, based it, and now they are penned up next to the HQ in the photo below.  A pasture will make for a nice little fortified area for the armies, and a nice little wrinkle to add to any battlefield. 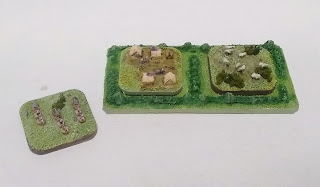 Make sure you check the Trossian War blog for updates on the conduct of the festivities.
Making Adventure Fiction Great Again
Subscribe today to be first to hear about my new release, plus receive a copy of a free fantasy novella!
Follow