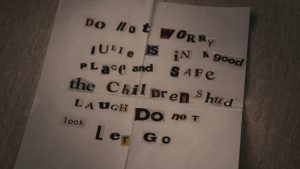 There is a strange thing about the show True Detective that I haven’t seen anyone mention before, and it’s a good thing.

These shows – each season represents a self-contained 8-10 hour movie than one episode in an on-going narrative – are at their heart mysteries on tow orders:

As to the second, they often broadcast the ending – the couple gets married or divorced and we know that well before the final curtain.  As to the first…

The most recent season is more than two years old as of this post, and nobody spoiled it. Season Two also features plenty of analysis without cutting directly into the heart of the series.

Sure, you can find spoilers easy enough, but every fan shows a healthy respect for the mystery.  They don’t blab the ending of either mystery, they don’t blab who to watch and what clues to look for.  They speak in vaguely glowing terms, as though eager for the listener to watch and enjoy the show in his own good time.

Everybody knows you can’t sell the show by giving up the goods, and they respect it enough not to do that.