Using a Reaper Bones wood sprite figure as an evil personification of the deep woods and wilds are inimical to human life?  That’s unpossible! 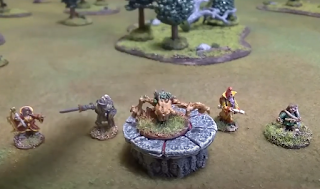 That’s what happens in this latest episode of “The Joy of Wargaming” wherein four intrepid heroes wade into the wilds to put paid to a bunch of forces of night.  Including the little bugger shown above.  This is the second in a series of seven games of Nightwatch, a great little solo game that smacks of ‘tower defense’ style video games.  It works well, and the complexity and challenge really ramp up with each successive game.  Highly recommended.

Not a big fan of Reaper figures – the Bones were cheap, but the ones I got didn’t take paint well, are squishy on the table, and the sculpts are mediocre at best.  Phasing those out when my next Alternative Armies shipment arrives, and replacing them with some proper metal alloy beasts. They look better, feel better, and play better.