Four heroes wade into the stinking mire of the great swamp.

Follow the full action here.  This was the fourth mission in a “Nightwatch” campaign, a solo wargame that uses tower-defense style design to keep the player on his toes.  Waves of enemies every round force some difficult choices as each mission requires the player to accomplish a few tasks.  In this case three relics must be destroyed, but in others the characters must search four points for an item and escape, or even defend three points from the hordes.  It makes for a complex tangle of challenges. 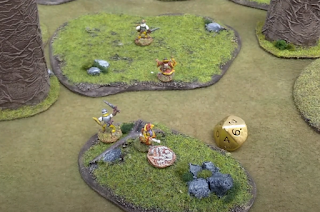 With two new hirelings manning the oars, our dauntless heroes venture to find and destroy the remains of three unholy abominations whose power lingers over this dank land.  Here, our intrepid wizard takes a moment to scatter the bones of one of the dead nightmares. 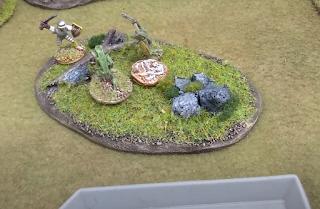 Jumped by two giant frog men – literally – the wizard skeedaddles, leaving the hired help to clean up the frog mess. 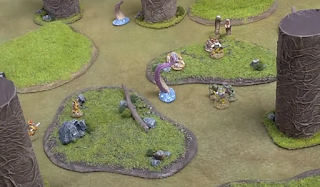 In this scenario, the terrain items are the only dry ground.  Movement between them requires pushing through the shallows at half speed for our heroes.  Not so for the frog men, who leap across the gaps, nor for the tentacled thing which pursues them through the mire.  They never got a clear look at the watcher in the muck, but they did get an all too close look at the thing’s giant pseudopods.

They also got a first look at the most dangerous of the Crimson Wyrm’s minions – scaly lizard men toting assault rifles who loved to hang back and unload from a distance.  Here, our brave wizard cuts them off with a wall of fire that obscures line of sight, and forces the lizards to take the long way around.  That detour means wading through the waters, and buys our heroes time to deal with the hordes of smaller and weaker lizard men that have them surrounded.
Making Adventure Fiction Great Again
Subscribe today to be first to hear about my new release, plus receive a copy of a free fantasy novella!
Follow