Skip to content
The Blackraven action has shifted to the alien planet of space weirdos some call Cha’alt.

And that means it is time for some eye-candy.  Here we see the Cult of the Spicy Wyrm, ambushed by the ragtag band on the right.  For some reason, Cobalt-15 brought the MSB along on the mission to ambush these pilgrims and steal a sacred relic that took the form of a pretty juicy rifle. 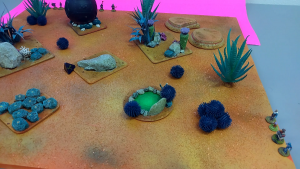 Now, in all it’s glory, and with the fuchsia skies of the drug-addled planet of mystery, we can play some Planet 28 and figure out how well it works for a long-run narrative campaign. 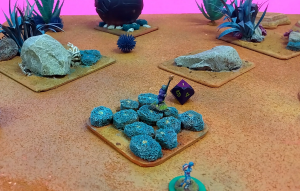 The short story is…not great.  It’s a fun little skirmish game, but it’s really made more for short-run campaigns filled with nameless mooks.  It’s a brutal game that is hard on its characters, and the advance system doesn’t allow for a whole lot advancement without incurring a whole lot of devolution along the way.  The cost to stay in business just overwhelms any advances you earn along the way.

Or perhaps the game shines when you’re running campaigns of 5+ games.  That’s possible, but at three games and ready to move on, I can’t say for sure.  If you have a few teams going against each other then the drop in team quality over time should be matched by that of your opponents.  Or maybe in a ‘race against time’ campaign, one where you’re struggling to preserve your resources for as long as possible, it could work great.  The core rules are certainly robust and offer a lot of room to play with different team strategies.

But for an episodic throwback to 1980s action-adventure TV where you’re looking to bop on through various settings and fun, it just doesn’t work out all that well.

Highly recommended for what it is, but what it is just isn’t what I’m into at the moment.