Somewhere on my list of things to do is superhero wargaming.

There aren’t a whole lot of manufacturers making cape stuff in 15mm, which means that a little more creativity than usual is in order.

Particularly if you’re going to play in somebody else’s universe.  Naturally enough, being a fan, I’ll be playing in the Alt*Hero universe.  Given how the story line is developing over there at Arkhaven, and the steady release pace, it’s a good bet I’ll get a few things wrong.  But hey, it’s a modern universe populated by characters that feel like they could step off the page.  Instead of Marvel’s eighty year rehash of whether these special people should rule over the world with an iron fist or a subtle knife, Alt*Hero’s main focus is on the shadow fight of lone actors coming together to push back against the wealthy global cabal.

That makes for a much more nuanced story, and I’m not even entirely sure what all powers these characters possess.  Here you can see Quantum Kitty appearing through a wall, a best fit for Michael “Hammer” Martel, and Rebel – who had to wear a facemask because I can’t carve a face that pretty from metal.  Dreamforge lacks his long blonde locks of his current form, let along a figure for his real(?) form which has only been teased so far.  I’m also without an alternate figure for Ryu No Seishin, over there on the far right, and had to reskin the figures quarterstaff to look like flames.

Things are easier for the boys in blue.  The UN’s team has only made a brief appearance, and that means that we can use any powers we want to for now.  Except for the leader, who again is represented by a figure that lacks Captain Europa’s black hair and half-mask.

A lot of the supers in Alt*Hero dress like normal people, at least the civilians.  Kelvin on the left in the next shot should be a man in a business suit, but I didn’t have a spare so he gets the full spandex on my table.  Not sure what sort of figure is next to him, but the spikes look enough like Shade’s outfit at a distance to work on the table.  Dynamique has the right costume, but a bob instead of a full head of hair, and the spider lady has her long hair folded up under a swim cap, to say nothing of the gloves and boots.  Hey, they all work for the powers that be and you know what they say…

And it was close enough for the Arkhaven Team’s social medio maven.  Look what I won: 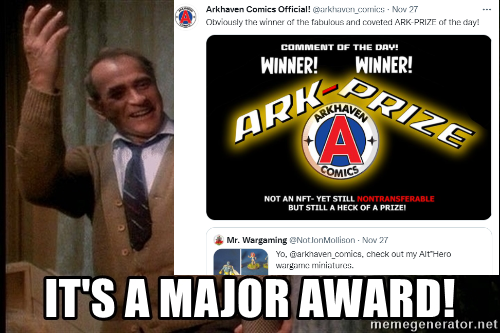