The 2005 adaptation of Douglas Adams’ “Hitchhiker’s Guide to the Galaxy” is an underappreciated gem. Sam Rockwell’s performance as the president of the galaxy presents a perfect blend of Clintonian and Bushian “aw shucks arrogance and charm” that is refreshingly non-partisan from a Hollywood production.  He even manages to presage the current occupant of the White House by turning in a performance of a half-brained president who is only capable of moments of lucidity and then only when juiced up on chemical stimulants.

Oddly enough, the film also takes a moment to show the campaign slogan of President Beeblebrox’s defeated nemesis – a slogan used by the Biden campaign and its media enablers that might have been ripped straight from the headlines of 2020.

Hence the declaration that we are dealing with genius level satire here.  This is the kind of subversive writing that Hollywood can no longer produce.  Even as late as 2005 it could deliver a movie with a message so subtle that everyone could watch the political gags and think, “boy, they sure are socking it to the other guys!”

It is a sad glimpse into how far the industry has fallen.

But it’s one of the throw-away lines that really inspired this post.

For all the ink that has been spilled about Donald Trump and the damage he did by putting the welfare of the American people ahead of the welfare of international banking elites, this right here provides a fresh insight to the absolute hatred the God Emperor inspired.  The man managed to buy the American people four years of relative peace and prosperity by blocking the string-pullers, and we should all be grateful for the respite he provided.  But we all know that his accomplishments were ephemeral, and the following administration wasted no time overturning them.  Given that he managed to effect so little lasting change, the question arises of why he managed to provoke such absolute fury among the managerial class.

And here we come to this line from The Guide: 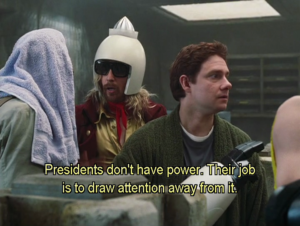 And for that, they can never forgive him.