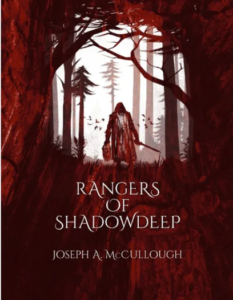 Why did I wait so long?

Joseph McCullough’s masterpiece, Rangers of Shadowdeep has everything a man could ask for in a solo skirmish fantasy wargame.

Everything except hope, but maybe that comes later.

The basic mechanics are simple.  Skill checks consist of a basic d20+skill versus a toughness number.  Combat is opposed d20+fight skill modifier, with damage determined by subtracting the loser’s armor score from the winner’s winning combat score.  It’s just that easy, and with a system this streamlined, Joe frees the player’s attention up to manage a host of other mechanics.

Those other things consist of managing the non-base system resources and, more importantly, the enemy figures.

The non-systemic resources are those decorative filigrees and cartouches that provide the real distinction and flavor of individual figures.  These are the special abilities and powers that, taken individually, require no heavy lifting on the player’s attention but which add up over time and with multiple characters to quickly overwhelm a player’s ability to remember them all.  We’ve all said, “Oh yeah, forgot he had that power,” and while it happens in Rangers of Shadowdeep, the slim speed of the core system makes that a less frequent occurrence than it might be.

As with the player’s figures, the enemy figures on the table have a simplified stat-line, and they are run by an AI system just complicated enough to allow for some uncertainty and character on the part of the adversary.  It ain’t much, but it’s got it where it counts, and it doesn’t take long before running the enemy team fades to a sideline in the game.

Which leads to the real strength of Rangers of Shadowdeep – the scenarios.  With all of the wargaming fat trimmed away from running the core game, Joe provides an enormous amount of mystery and adventure in an exploration of a wide variety of mission-specific rules.  These are the edge cases that many games mention, but few games utilize, and since so many of them are rarely used, the rules for them can be safely tucked away within the scenario specific rules.  This isn’t a new process or development in wargame technology, but Joe takes the idea to the next level by use of very creative terrain and atmosphere effects, monster abilities and behavior, and an over-arching sense of plot. 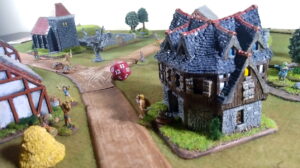 That plot, a black cancer infecting reality that must be fought by strength and steel and spell, gives our rangers a reason to range into dark places.  It is the driving motivation behind the conflict played out on the table.  Some source of reality warping and soul-destroying evil is out there in the depths of shadow, and your mission is to find it, stop it, and kill it.  This information is typically presented in the usual wargame fluff – a bit bland on the writing front but serviceable enough for what it is – and can be freely ignored if all you’re after is a fantasy skirmish game.

From a purely mercenary standpoint, this makes sense.  The price of eternal vigilance is the constant expenditure of money on more supplements and adventures.  You never have to worry about running out of story because there will always be another shadow to fight.  You never have to worry about the game losing its focus because there will always be more depths within the shadows.

My one complaint on this score is the oppressive theme that our heroes are doomed to failure that permeates the narrative.  In the early stages they are cast as holding back an inevitable rising tide, and the last best hope for a world doomed to fall to shadow.

So then what’s the point?

While this does mimic our own world’s Long Defeat and need for eternal vigilance, it lacks the clarion call to arms that drives us all forward.  Absent the redemptive power of Christ in this world, and the hopes for our eternal reward in the next, Rangers of Shadowdeep lingers within the modern world-view of secular pragmatism.  We fight because it is better than not fighting.  We suffer only to alleviate a greater suffering. In the cosmic balance, our little lead heroes fight and die to preserve the mere creature comforts of those they left behind?

And yet, even if the game doesn’t acknowledge the real reason for the season of war, it cannot escape from the Christian roots of its worldview.  You can file the serial numbers off Western Civilization, but it remains what it is.  And that is a game about fighting the demons who sow chaos in this world, not to maximize creature comforts for those around us, but because we serve the King of Kings who will reward us in the next.

Again, from a mercenary perspective, Joe made the safe decision to design the setting from the usual modernist echoes of Tolkein and World of Warcraft.  It’s a smart approach, and one that won’t alienate potential customers.

But I’m not much for smarts when wisdom is on the line, so as for me and the House of Wargaming, in our daily life and on the tabletop and even within the confines of Joe’s Playground, we serve the Lord.

(Even if our little lead heroes call the Heavenly Hosts, “Lords of Light” in battle.)