The locusts are buzzing again.  This time it’s not the rubbing of their hind legs, it’s the clapping of their ass cheeks as they stomp about demanding that the year 40k look more like the Current Year. 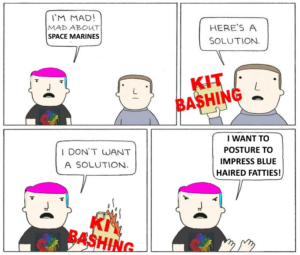 It’s the same old song – the people who can’t build, take.  They move in, move the furniture, fail to respect the hustle, and generally ignore all the things that make a hobby great.  And a bunch of the weak-jawed ‘spokesgoofs’ are making noise in the hopes of saving miladies and miYWNBAW’s from the boss-level chuds who built the hobby.

This time it’s all about pushing a publicly held corporation to lose big money catering to their micro-niche tastes in wargame figures. Which it will, if it caves in.  For once GeeDubs naked greed may protect us all from their proclivity for bad business decisions.  Ain’t that a kick in the pants? 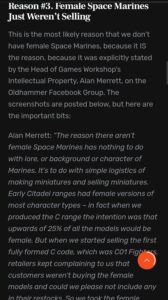 There’s no point in going into any logical reason why they are wrong.  They won’t listen to anything but the sound of their own bad relationship with their fathers.  The point of this post isn’t to argue with their point – it’s to remind you that they don’t actually have a point other than a desire to ruin.

They don’t want Spaz Marines with child-bearing hips and plenty of sweater-meat for their own sakes.  With a bit of kit-bashing they could have that.  Or by playing the sexy biker nun faction.  Or by…why bother?  If they wanted it, they would make it happen.

What the locusts really want is to force YOU to play with Space Maureen.  It’s the same play from the same playbook that starts with “what happens in my bedroom” and leads (but doesn’t end) with “fine him a million dollaroonies for not wearing the rainbow jersey”.

We all know it.

So don’t respond to these whack-a-do n00b entryists with anything that remotely smells of logic or argument.  Go straight to mockery.  When you take one look at any of them, you’ll realize what a target rich environment they make.

Do it for him. 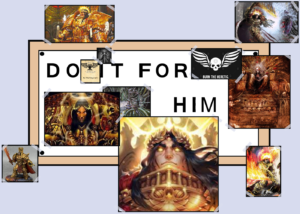