The boy has been pestering me to buy and paint a full unit of Rebel Mini’s slick new Sons of Thunder alien dwarves.  He’s a bit jaded on the skirmish level gaming after seeing four of his Mangalorc gang killed in action and his leader captured by his sister’s all girl gang.  He’s ready for some one-offs, and you can’t really blame him.  His enthusiasm was infectious, resulting in me cracking open the Tomorrow’s War and boning up enough to run through the introductory scenario, Lost and Found.

I’d read a few after action reports (AAR) on this scenario, like this one, this one, and this one.  That helped resolve a few questions before they’d even arisen, and meant that I knew what to expect out of the game…or did I?  We’ll get back to that, but first, and interlude:

One of the cool things about Tomorrow’s War is that it is scenario driven, and not points driven.  That means that most everybody is going to cut their teeth on the game by playing the scenarios detailed in the main rulebook.  It’s a minor point, but it’s worth mentioning that it does help you feel like part of a community when you play the same game as others, even if those games are separated by 1,000 miles and two years.

With that out of the way, let’s jump right into the action. 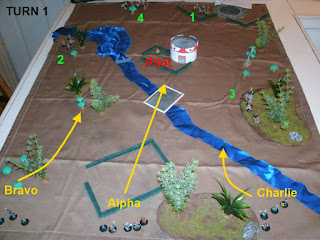 Here’s the table setup at the start of the game.  You’ve got the Ladies In Blue (the USMC for those of you following along at home), a small high-tech squad of well motivated and well trained professional soldiers attempting to move north to make contact and rescue the famous movie star, Wally (a downed pilot per the rules as written).  Shown here, the ladies are represented by three fire teams whose movement and fire is shown in yellow.  They are represented by a mix of Rebel Mini Black Widow mercs and Laserburn Law Officers.

Opposing them is a mixed force of alien mercenaries (by GZG) and yellow suited aliens (by Rebel Minis) broken up into four fire teams shown in bright green.  The rules list these as the DPRG, a larger force of motivated, but not nearly as well equipped or trained regular troops who want to keep that robot on the table through Turn 8, and rack up as many kills and POWs as possible while doing so.

In turn one, the ladies send Fireteam Alpha sprinting north while Fireteams Bravo and Charlie take up flanking positions.  The Allied Forces lurk in the woods for the turn, waiting for a more opportune moment to light up the battlefield.  That moment presents itself moments later… 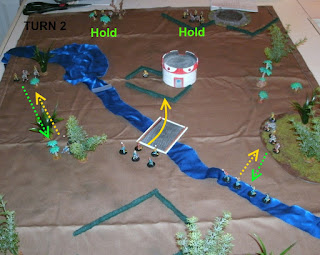 The two flanking units exchange first fire.  This would set the pattern for the bulk of the game.  Meanwhile, Fireteam Alpha slowly approaches Wally, trying to stay under cover for just one turn to make a safe dash for the pilot in the following turn. 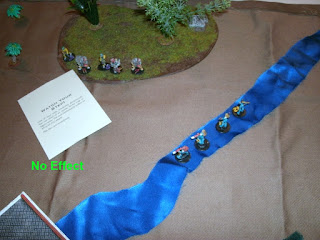 But before they could make that dash, the Allies triggered an old booby-trap of their very own, set in the eastern woods during a previous engagement – likely the one that turned a set of ruins to the north into a giant crater.  The net effect of the Fog of War card was…one less bomb for the UXO boys to have to collect later. 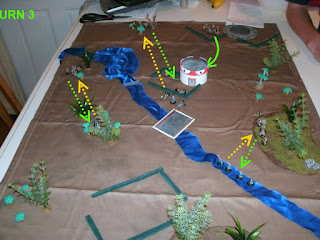 Meanwhile, in the center, the Ladies were ready to score the first victory points of the day by making contact and answering the age old question of, “Where’s Wally?”  As the flankers continued to trade blows to no real effect, Allied Fireteam Three lit up the Ladies Fireteam Alpha like a Christmas tree.  A brutal exchange of fire left the Allies unhurt and the Ladies pinned, which allowing the Allied Fireteam Four to rush right up to the old farmhouse, where they psyched themselves up for… 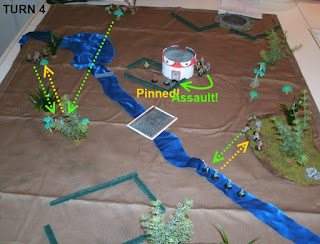 …the big grapple.  With the ladies in the center depleted and demoralized by the previous turn, the still fresh Allied Fireteam was able to hold them off and found themselves… 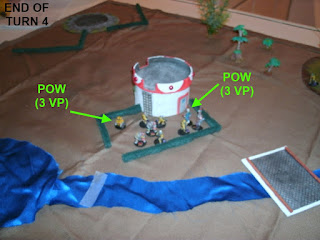 …dead or captured.  This photo is blurry to represent the bitter tears of anger and frustration your humble editor felt and the pain and humiliation of losing two brave ladies KIA and seeing another paraded around Allied-ville, to say nothing of the secrets pried out of the most adorable trash compacting robot ever to grace the silver screen.

All hope was not lost, however.  If Fireteam Charlie could make a solid blow on the right flank and a quick push for Wally, the day could be salvaged… 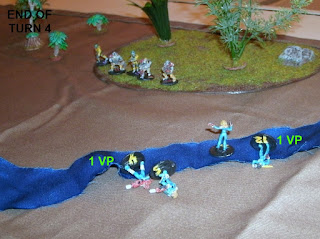 Yeah, this doesn’t help.  Technically, this is the start of Turn 5.  After tallying up the Allied VPs gained through POW, KIA, and heavy casualties inflicted the score stood at 11-0.  With no way of scoring more than 10 VP (3 for contacting Wally, 7 for getting off board by game’s end, and all this with only 4 remaining combat effectives), I conceded the game.

The major turning point actually came in the second turn when the USMC/Ladies lost the initiative never to recover it.  That was a real backbreaker in that it  forced the USMC/Ladies to keep reacting to events rather than driving them.  The total inability of the USMC/Ladies to win a Reaction contest wasn’t helpful either.  Again, the well trained force just didn’t have the drive or motivation, and paid dearly for it.

Before playing this scenario, it seemed like the general consensus around the internet was that this scenario is overly balanced in favor of the USMC/Ladies, but now that I need links to those reports, all I can find are reports that it’s a close game and evenly balanced.  Go figure.  At any rate, we didn’t find the game overly balanced.  A few dice breaks either way could easily have turned the tide of the game.  While it’s hard to tell after just one game, it also seems like the Ladies/USMC could have benefited from a more aggressive strategy as well.  We will be punching up the terrain a bit and playing this again next chance we get.

Oh, and hey, the crunch in this report is pretty light, but if you can think of anything we might have done wrong here or rolls we might have missed, feel free to let me know.  This was only our second game, and while it went faster than the first, it still feels like we’re missing something fundamental in our play.