As if this blogger didn’t have enough irons in the gaming fire, I’ve been inspired by the likes of Peter Dell’Orto, Dyson Logos, and a host of others to start in on a new megadungeon.  As with so many others, it may never see the light of an adventurer’s torch.  It’s okay, man.  Building, as with exploring, is one of those “journey not destination” things.

The basic set-up of the megadungeon is your standard city-built-over-an-ancient-evil.  As is so often the case, the evil bubbled up, the city fell, and now you’ve got a mess of ruin at the surface.  The whole lot is overgrown with trees and brambles and hills and other sight-blocking terrain.  Keep that though, we’re going to circle back to it in a bit.

Before we talk about those first seven dungeons, though, let’s take a look at the players’ map for the ruined city to be named later: 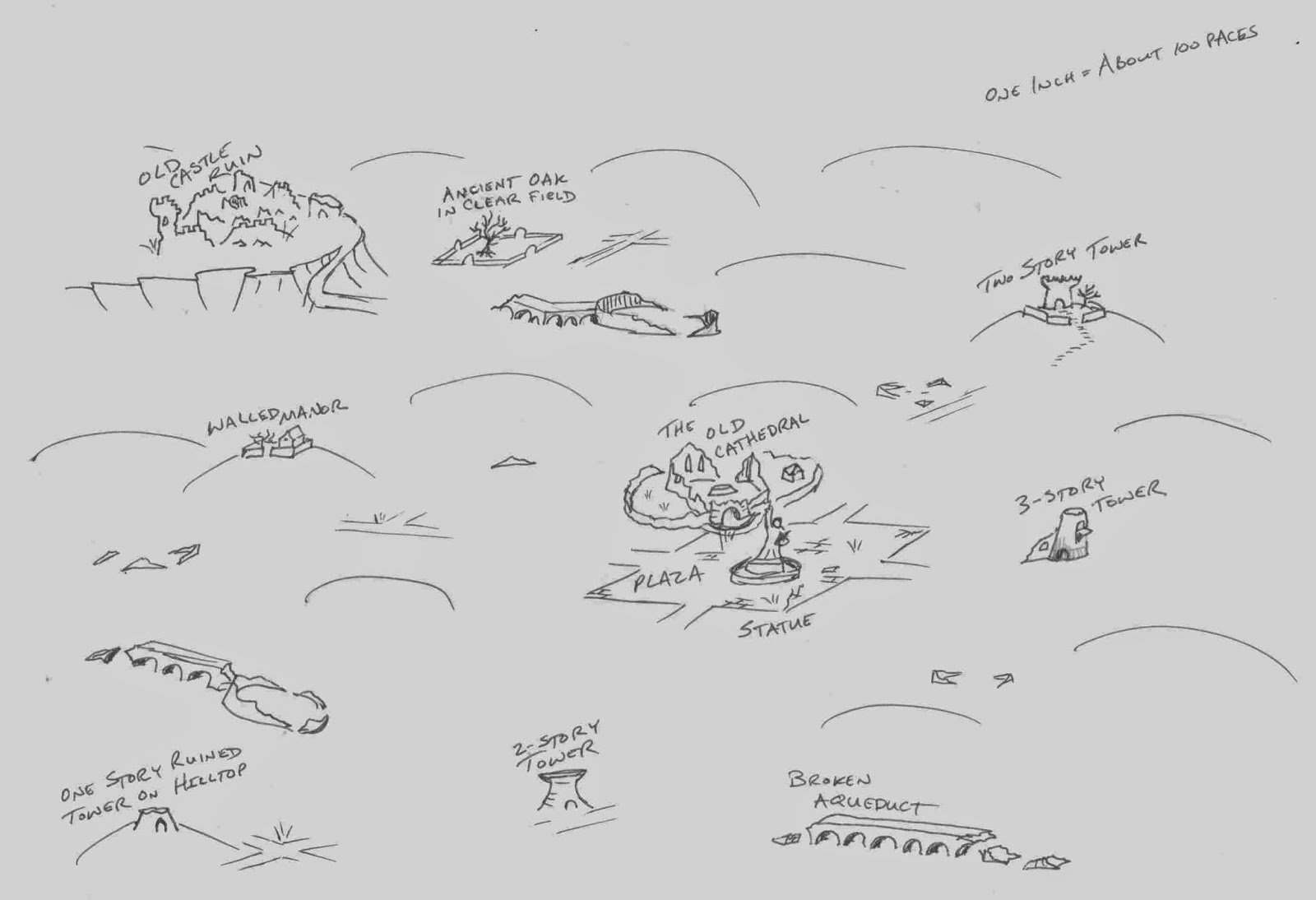 What you’ve got there are eleven named sites to investigate, plus a bunch of collapsed sewer tunnels*.  A few of them are dead-ends, no dungeon to be found anywhere.  A couple are dead-end dungeons with no connection to the main level of the megadungeon.  The rest do contain passages into the dungeon proper, but not all of them are obvious.  At least one of these dungeons contains a straight shot into the dungeon without any preliminary encounters.  The odds of finding that right out of the gate are small, but clever or lucky parties can bypass the ruins.

As this is an old-school sandbox style game, not all of these dungeons are suitable for first level adventuring parties.  Some of them they’ll have to come back and deal with when they’ve got more experience.  Which provides a way to “unlock” new entrances later in the campaign.  This is also a good place to point out that a successful party should be able to find exits from the dungeon to this map if they work their way deep enough into the dungeon proper.

What have we learned?  Nothing if you’re paying attention to the smarter old-school bloggers upon whose shoulders I stand.  But if you’re balancing on those shoulders with me, maybe this series will help by providing another example of megadungeon crafting.  Worst case scenario, maybe you find a couple ideas to steal for your megadungeon.

*They make fine hidey-holes, but none link up with the main dungeon – that’s at least one cliche avoided.