After a brief rest amid the splendors of Waterdeep, our plucky band of heroes found themselves heading north once more, once again disguised as humble guards protecting Dragon Cultists who were disguised as a humble road construction crew.  The Lords of Waterdeep had set out to repair the long abandoned north road, which used to allow passage through a massive swampy mire.

On the road to the roadhouse, the party came upon a large stretch of roadway filled with quicksand. This sort of thing had happened a few times along the road, which did pass through a swamp after all.  Skirting the edge of the quicksand, the party quickly learned that this quicksand was dug by bullywugs who had cleverly lain in ambush.

The surprise was total, with the necromancer Gilgamesh taking a beating, outnumbered by the slimy creatures.  At one point he was down to his last death save.

But no one could get to him, everyone locked in savage melee with the remaining bullywugs. 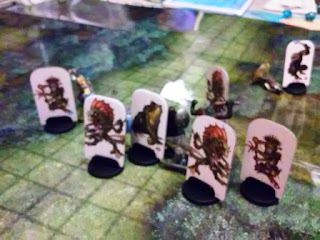 Fortunately, his death saves went well, and he managed to stabilize before bleeding out.  Once the rest of the bullywugs and giant frogs were dispatched, the medics patched him up toot sweet.

They had freed lizardman slaves, fought an army of undead, fought through bullywug ambushes, and now finally found themselves at a safe rest-stop: The Carnath Roadhouse.

Let’s just pause for a moment to get the Patrick Swayze jokes out of the way once and for all, okay?

The Roadhouse was a rough structure built on the only dry patch of land for miles, and served as the construction hub for the project.  Poking around a bit, the party found a secret basement, with a long tunnel that lead off into the swamps where it emerged…right in the center of a kobold work camp! Clearly the work of the Cult of the Dragon.  The noise and approaching light of the party had warned the kobolds, who set about defending their camp with a fervor based more in faith than in skill.  The fight was short and bloody, but two kobolds escaped to warn…well, the party wasn’t about to wait to find out.

Hurt, wet, muddy, with their cover blown and with their resources depleted, the party elected to move off a ways into the swamp and camp to rest and recuperate.

And that’s where we left the session.  That’s also where this narrative trails off.  Your humble blogger has two too many irons in his fire right now, and the D&D sessions are going to have to take the hit.  As you can tell from the increasing infrequency of this portion of the blog, it’s been getting harder and harder to make the sessions.  Rather than string the group, and you, along, it’s time to put this story to rest.