Yesterday Brian Niemeier dropped an epic post about Fifth Columnists that is well worth taking the time to read.  Zeroing in on the most important bit:

Don’t GIVE money to people who hate you.

Don’t give MONEY to people who hate you.

Don’t give money to people who HATE you.

Even with all that said, Brian undersells this important concept.  It’s not just about the money. 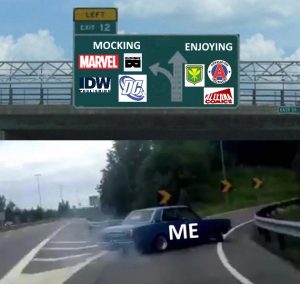 Consider that the SJWs themselves provided a massive amount of support to Vox Day during the Alt*Hero crowdfunding campaign.  All of their outrage and sturm and drang served Vox’s interests by elevating the profile of his project.  Their constant attention – even negative attention – directed potential allies toward Arkhaven Press, and they only fell silent on the subject once the big funding bomb went off and it was too late to stop him.  Similarly, recent attacks by Mr. Diversity and Comics and Ethan van Sciber work to Vox’s advantage as they are exposing Alt*Hero to a new pool of potential customers.

In the fight for attention in today’s crowded entertainment market, any attention paid to the people who hate you works to their advantage.  The Last Jedi might have been the worst film you’ve ever seen, but to paraphrase Jack Sparrow, “Ah, but you did see it!”  Even if you didn’t see the thing, if you spend hours mocking the producers and stars and fans and various hangers-on, you are still providing oxygen to the dumpster fire.

Granted, mockery is a weapon against which the earnest and pinch-faced leftists are particularly vulnerable.  It’s an important tool, but that is a blade best wielded sparingly and with scalpel precision.  You only have so many hours in the day.  So after that first rush of dogpiling on the rabbit, pivot away, and use the rest of your time to help fan the flames of other, better, properties produced by those who do not hate you.

An example:  Daddy Warpig provided a tour de force demolition of The Last Jedi.  Rather than join in the Mouse Wars curb-stomping, I’ve turned my focus on a far better Star Wars than anything the House of Mouse could possibly produce.  The first in my series of detailed reviews of Nick Cole and Jason Anspach’s Galaxy’s Edge series went live this past week.  There will be more to follow.  At least five more by current count, and more if we are lucky.  Seriously, it’s so good I’ve been sucked into an epic book series for the first time in years, even after swearing them off for good.

Likewise, when it comes to enjoying the slow motion train wreck between Marvel and DC with all those lesser trains like IDW thrown in for good measure…it’s time to stop.  If you are a comics fan, turn the spotlight on alternatives.  Deny Marvel and DC the oxygen they need to survive by pointing fellow comic book fans away from the wreckage of the SJW convergence.  I’ll have a local kine comic review up in a few days, I’ll wear my Alt*Hero shirt with pride, and if the local shop ever gets in gear and orders a few Alterna Comics, you’ll hear about those, too.

This isn’t just about making a better marketplace or even making a better world for you and your children.  It’s also about making a better life for yourself.  Getting dragged down into mockery of incompetents might be cathartic given how many of those currently sit in seats of media power, but it’s also not a negative mindset and not terribly constructive.  Focus on the positive creators, and focus on creating better alternatives to the major media producers, and you’ll clear a lot of anger and bitterness from your own heart.  You’ll start to notice all of the wonderful aspects of life that surround you, and as you and your circle of friends talk more about the things you’ve discovered worth your time, you’ll start to find more and more great stories to read, and hear, and watch.

And what could be a better use of your time than that?

As for supporting your friends – I’ll be doing a little bit of that later today by rolling the bones of fate to determine who gets a download code for a copy of Cuphead.  If read this post too late to get in on the fun, don’t worry, everyone who signs up for my newsletter will receive a free e-novella, “Wyrm’s Bane”, as a thank you for being part of my audience.