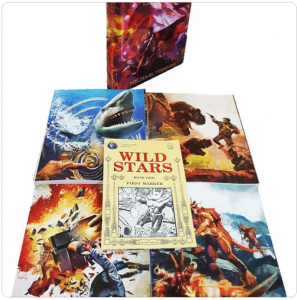 Michael Tierney is one of the brighter stars in the constellation of Cirsova authors. The dreamtime fight for survival of his “Shark Fighter” story in issue #2 demonstrated to me that the magazine had a lot more to offer than just blasters, space knights, and weird tentacles. Over the last few years, the world has slowly become more and more acquainted with the vast landscape of his “Wild Stars” Universe, and despite a few attempts to get into that world, I could never quite get my head around what Michael was doing with it.  Just look at that photo – magic shark fights, gunfighters versus dinosaurs, space explodeys, and crab-man attacks?

Tierney has thirty-five years of blood, sweat, and testosterone poured into the Wild Stars property, and like any literary endeavor of that scale, it can be hard to know which door is the right one to enter.  For me, the comics and “Wild Stars III – The Warmageddon” just weren’t the right doorway.  The publishers were kind enough to send me an Advanced Reader Copy of the current Kickstarter for the fourth novel, “Wild Stars IV: Wild Star Rising”, and everything finally clicked into place.

The Wild Stars setting isn’t a narrative – it is a framing device.  Sure, there’s a grand sweeping narrative backdrop to the entire thing, but that’s all just set dressing for the meat and potatoes of big dang heroes going on big dang adventures.  You can think of it as a less nihilistic version of Warhammer 40k, where the movement of Big Powers happens at a glacial pace, freeing up the stars of the show to race about space and time escaping from world-wrecking cataclysms, hunting down starkilling artifact weapons, and rescuing women from prisons made of neutron star clusters.

With “Wild Star Rising”, the reader gets drawn into the action one small step at a time.  The seamless merger of sci-fi and fantasy results in an epic conflict that kicks off around the time of the final destruction of Atlantis.  The points where spacefaring nations interact with the denizens confined to the bottom of earth’s gravity-well make sense in a way that most efforts to marry the two genres don’t.  The writing crackles, and the adventure leaps from ship to prison to outer space to back in time with a relentless pace that’s a joy to follow along.  New characters step on scene fully formed, and fully described for newcomers to the series, and Tierney doesn’t shy away from jerking the rug out from the reader’s expectations in a way that is both fun and inspiring.

The larger than life characters are all motivated by the same petty hopes and dreams as all of us, they just paint their stories on a much larger canvas.  With “Wild Star Rising” Michael Tierney provides a John C. Wright-esque marriage of the two, what one clever wag described as Wrighteous, that makes for a great introduction to the world.  In many ways, the Wild Stars universe reminds me of the Lensman series, and if you’ve ever read that classic series by the old master Doc E. E. Smith, you’ll recognize that for the compliment it is.

Or, you could just start at the beginning and back the Kickstarter at a level that nets you the hard cover omnibus.

But hurry – you’ve only got a couple of days left!