John W. Campbell, we barely knew ye.  Mark your calendars, the Hugos themselves are now shortlisted for the next struggle session.  And pretty soon after that, flush toilets.

Less than two weeks after the latest parody version of the once-esteemed Hugo Awards, the always tedious Analog Magazine has joined in attacks on the latest victim (archive link) of the point-an-shriek brigade.  None other than John W. Campbell – a man whose name they’ve been wearing as a skin suit for some time now rates a spin through the pillories before a final trip down the memory hole.  This comes on the heels of one Hugo award winner you’ve never heard of claiming with no evidence whatsoever that Campbell was a “fascist”.  That’s all it takes.

Campbell’s provocative editorials and opinions on race, slavery, and other matters often reflected positions that went beyond just the mores of his time and are today at odds with modern values, including those held by the award’s many nominees, winners, and supporters:

As we move into Analog’s 90th anniversary year, our goal is to keep the award as vital and distinguished as ever, so after much consideration, we have decided to change the award’s name

They are keeping the prestige that comes with being associated with the man, though.  So there’s that. 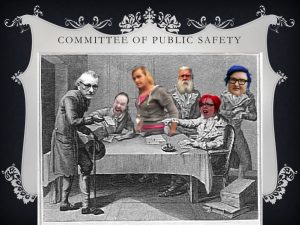 We all know why they are doing this.  For all his faults and failures, Campbell still represents a harkening back to a time when anti-Christian and anti-Western thought was not the rule of the land, and for that he must pay.  Today we only celebrate degeneracy and the continued devolution from the masters.  Prose that gets the blood pumping or the brain churning has to be dulled to a blunt and turgid slog.  Stories of heroism and discovery must be replaced with stories of payback and cultural flagellation.

Campbell’s attempts to breathe new life into science fiction were misguided at best, and it is perhaps fitting that his decision to turn his back on Christendom and the manly virtues has led his legacy to this pass.  In a very real and deeply ironic sense, stripping his name from the New Author award represents just one more step along the path that he set for science-fiction.  Had the man called for an embrace of western ideals and the Christian love of science as a means for glorifying God rather than glorifying man, the culture of mainstream science-fiction might not be such a hot mess of rainbow haired clowns and the tubby noodle-armed men who thirst for their approval.

The man also succeeded in keep the flame burning.  In his own way, his pursuit of the Truth echoed and touched on the divine.  Unlike the petty word merchants who dominate mainstream publishing today, he had a few good ideas, and he sought to advance mankind’s understanding of the universe.  He might have had the horse and cart backwards, but the people demanding Campbell get the Soviet-Photo treatment don’t even have a stone wheel.  They are psychopaths with gasoline and a lighter insisting that their clumsy destructive efforts are better than the craftsmanship it took to build the sci-fi genre in the first place.

And they always need a new victim.  The performative tricks they use to distract from their lack of talent demand constant bread and circuses and constant star chambers and show trials.  Having already jettisoned the white Christian men of the 30s who built the genre they’re parasitically leeching off, they had to advance the clock to the 40s and 50s to find a new victim.  With him out of the way, the only question is…who is next?

My money is on the non-pedophile authors of the New Wave.  They’ll leave Marion Bradley and Sam Delaney alone for obvious reasons.  Guys like Bradbury, Dick, Zelazny, and maybe even that cantankerous old bastard Ellison.  They won’t be happy until they’ve eaten all the seed corn.

But there will always be farmers out there raising up a new crop of fun and adventure that pays homage to the greats who came before.  My own works aim for the men Campbell sought to replace – with enough success one day the forces of Mammon may even come for me.  God willing, I’ll chalk that day up as proof that I’ve done things right.  You can judge for yourself with some solid Space Opera that loves you and your culture, and does it up in a fine two-fisted, science-fiction style: