Why are things so shrill now?

Sure, the Death Cult had infiltrated many of them, but they knew how fragile their positions were.  They had to be subtle.  They had to slide through the collective conscious like a thief in the night lest people start noticing what they were doing.

Lately, the only thing American have in common – the only current event – is politics.  So it dominates conversations.  To be fair, a big part of that is that the Death Cult mask has slipped so far down that you can’t help but notice “everything is political” just the way they always said.  It wasn’t always so, but they’ve made it so.

Nothing really insightful about that, but have you considered the role that streaming services have played in shifting the national conversation down one rather depressing and predictable path?  With the advent of binge watching, we no longer have that season-long conversation about what happened last night and what might happen next.

And the worst part is that the last show to have that sort of national impact was and might always be (shudder) Game of Thrones.

This really is the apocalypse we deserve.

Speaking of which, the greatest collection of post-apocalyptic fiction is now available for purchase, in hard copy only mind you, from Lulu.com.  Check it out: 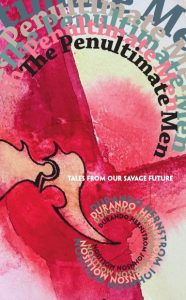