For the record, that was my uber-powered Paladin trashing the tracks of the Jeffro Pacific Express Freight to Funkytown.

Before we get into the view from the player side of the screen, a confession: I used this generator to roll up a fighter type and got the stats for a Paladin on the first try.  That was a mistake.  After the session, I rolled up a few more characters with it and discovered to my horror that it uses a modified Method III to guarantee a fighter’s stats.  A modified Method III is not Method III, as handed down from the pen of Mister Gygax. 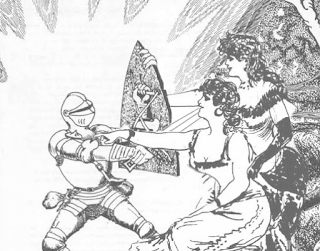 I should have known better.

My only solace is that, due to logistical difficulties, this game was a one-off for me.

And what a one-off it was.

My paladin, Aggros DeLas Aled, tagged along because his master caught him “with his hand in the proverbial cookie jar.”

A minor point to add, because it didn’t come up again in the session, Aggros isn’t the brightest guy and when he said “proverbial” he really meant “literal”.  The degenerates in the party assumed he was attempting to atone for the sin of lust when in fact he was atoning for the sin of indulging in carbs during his physique cutting season. 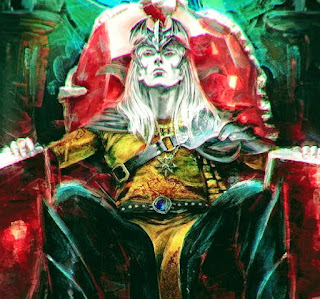 And here we see the value of old school play.  “I was told to help you by my superiors,” is a perfectly valid excuse for the wrong kind of character to have to work with a group for which he is ill-suited.  Even a golden souled Paladin understand the value of hierarchy, and can put a willingness to obey the orders of the head of his order above his own personal desires.  That allows him to play along while maintaining a clean conscience.

And as a demonstration of my trust for the dice, consider the following exchange:

DM: The naked demon woman lands next to the whore.
Aggros: I tackle her.
DM:  The demon or the whore?
Aggros:  Hang on.  *rolls dice*  The demon.

Now what, you might ask, would you have done had the dice told Aggros to tackle the whore instead? 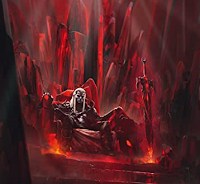 Rolled with it.  Aggros would have shielded her from the rain of death about to be unleashed by bow-armed snipers placed at key positions around the area.  He would have cured diseases on her and offered to escort her to the nearest nunnery to take up the habit and leave Trollopolis in the rearview mirror forever.  With some stabbity stabbity of the demonette along the way, naturally.

That also would have made a fine story.  As it happened, it was not the story that fate or chance or luck had in mind that night.

Because we rocked that demon-lady hard, trussed her up, and delivered her to Elric the King who probably won’t make of her a queen to sit by his side until Stormbringer drinks her soul.