This is not a game for kids.

Well, it can be, but I wouldn’t recommend it.

What you’re looking at here is a light card game that amounts to “Blind Indian” on steroids.  The deck consists of three suits (“factions”) of five cards ranked from one to five.  Players are dealt a single card that they don’t look at, but hold up to their forehead.  Each player takes it in turn to ask one question of another player, trying to deduce what faction and number is on their own card.  Then the players take it in turn to vote and you get points if your faction’s highest number gets the most votes.

So far it’s a pretty good deduction and bluffing game.  The three laws part enters on subsequent rounds, when rules, or programs, are added to complicate things.  One rule on round two, two rules on round three, and three on the fourth (and final) round.  These rules are simple and take the form of “no pointing at other players” or “no using names” or even “close your eyes while asking your question”.  Three of them can get to be hard to handle as the rules interact in fun ways.  You get one point for catching a player breaking the rules, and so later rounds become tense as players try to toe the line. 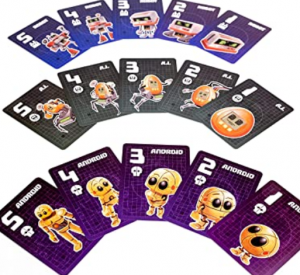 Unfortunately, the amount of deduction and reading other players is too much for casual gaming.  Sure, you can play it nice and easy.  The game doesn’t really shine in that form.  As with poker, the game works best when you have a group of smart and savvy players who can play all the angles and come up with creative strategies for figuring out what questions to ask to force other players to reveal information about the hidden cards.  More so for those who can use the questions of other players as clues to what card they hold.

In other words, it can be frustrating for advanced players to play this game with players who ask questions at random.  Those whose questions reveal nothing about what they can see will provide no aid to the more sophisticated thinkers.

A cut-throat game of this would be something interesting, but the cartoonishness of the art and the goofiness of the game might put off the sorts of mature players who would respond best to the challenge inherent in the deductive reasoning.

One minor complaint is that the game needs good lighting.  The suit colors on the cards tends toward the darker side, and it is easy to mis-read them across the table when played at night or in subdued lighting.